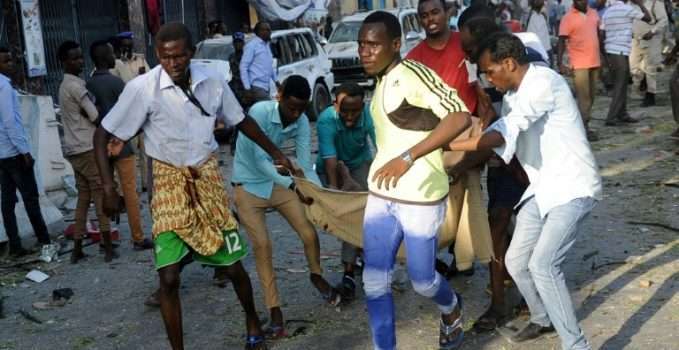 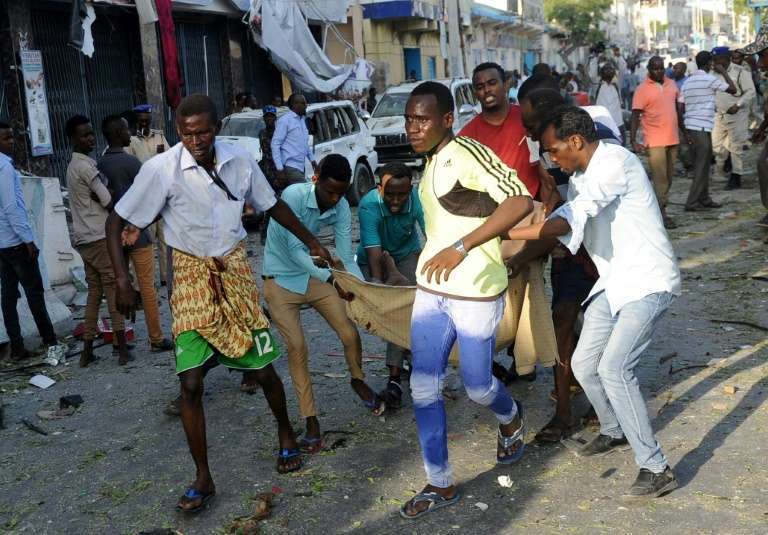 Somali people carry a man away from the scene of a car bombing attack in Mogadishu, Somalia, on March 22, 2018 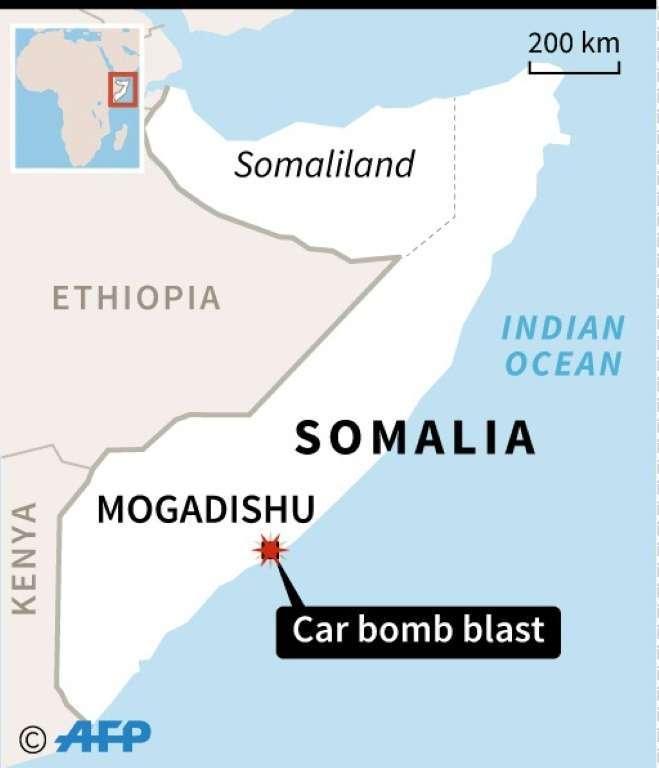 At least 14 people were killed and several others wounded on Thursday when a car bomb blew up outside a popular hotel in Somalia’s capital Mogadishu.
The Al-Qaeda aligned Shabaab group said it was responsible for the blast in front of the Weheliye hotel in the city centre, claiming it had targeted a gathering of government officials, army and intelligence officers.
A government spokesman said 14 people had died but the toll could rise as rescuers search through the debris.
“There was a heavy blast here and the number of casualties we have is so far 14 killed and a number of others wounded,” said Abdiazis Ali Ibrahim, a security ministry spokesman.
“The toll could be higher,” he added.
Witnesses described a big explosion on Makkah al-Mukarama street, one of the city’s busiest running through central Mogadishu, which was packed with people heading home from work at the time.
– ‘Victims were having tea’ –
“The blast was so huge, a vehicle containing explosives went off near a teashop in front of Weheliye hotel, leaving more than 10 people dead. I saw people being rushed to hospital and some of them were already dead,” said witness Abdulahi Moalim.
“Most of the casualties are… people who were spending time to take tea, there was devastation and buildings were damaged,” said another witness Mohamednur Abdirahman.
Mogadishu is regularly hit by bomb attacks carried out by the Shabaab which is fighting to overthrow Somalia’s internationally-backed government. The Weheliye hotel was previously attacked by Shabaab gunmen in 2015.
In February twin car bombings left 38 people dead in Mogadishu.
In October last year, Somalia suffered its deadliest-ever terrorist attack in which more than 500 people were killed in a truck bombing in a busy part of the city.
In the wake of that attack, Somalia’s government declared a fresh offensive against Shabaab.
The United States has also stepped up the tempo of drone and missile strikes, and increased its support for ground attacks by US-trained Somali forces.
The Shabaab was pushed out of the capital in 2011 — and subsequently other towns and cities — by soldiers from the African Union Mission in Somalia (AMISOM).
But the Islamists still hold sway in large parts of the countryside and launch regular gun and bomb attacks on government, military and civilian targets in Mogadishu and ambushes on military convoys and outposts.
East African leaders contributing to the AMISOM force last month called for the United Nations to reconsider plans to withdraw troops by December 2020, saying the timeline was unrealistic and could lead to a reversal of gains.