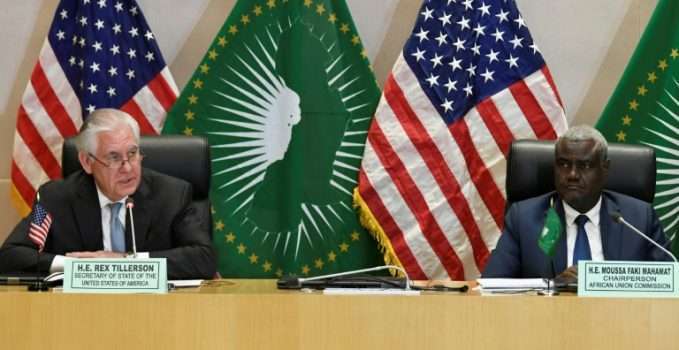 Posted On March 8, 2018 By In COUNTRIES, Ethiopia, Photo gallery, SLIDER-, VIDEO&PHOTO With 505 Views

AU chief meets Tillerson, says Trump slur ‘in the past’ 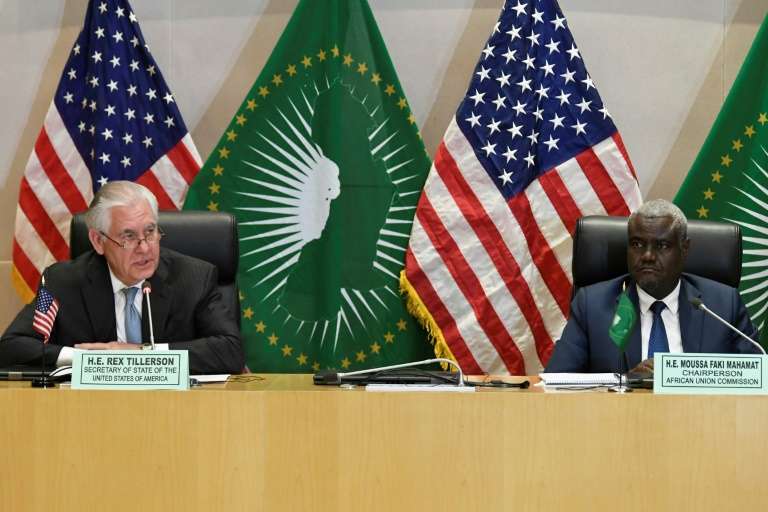 Washington’s top diplomat began his first Africa tour Thursday by meeting with the African Union chief, who said the continent had moved on from a reported insult by President Donald Trump.
Secretary of State Rex Tillerson and AU commission chairman Moussa Faki Mahamat discussed security and counter-terrorism, trade and development, corruption and conflict in an hour-long meeting at the continental body’s headquarters in the Ethiopian capital.
However looming over the meeting was Trump’s alleged description of Africa as a “shithole” in January, which forced the president to pen a letter reaffirming his commitment to the continent and dispatch his top diplomat to try to heal rifts.
Faki, however, insisted the slur was now in the past.
“I received a letter written by President Trump to myself and I shared that with other African leaders. I believe this incident is in the past,” he said.
Tillerson’s five-nation Africa tour — to include Djibouti, Kenya, Chad and Nigeria — has been described by analysts as a “listening tour”, with no deals or initiatives due to be announced.
“The purpose of my trip is to listen to what the priorities of the countries here on the continent are and see where there is good alignment,” said Tillerson.
Tillerson praised the AU as a “force for good”.
He and Faki discussed continued US support to African counter-terrorism forces in Somalia and the Sahel but no new concrete commitments were given.
Tillerson said the AU Mission in Somalia (AMISOM) is “clearly an example of countries coming together to counter terrorism, promote stability and enable the delivery of much-needed aid.”
“We have not yet won that battle in Somalia and we must stay at it,” he said.
Tillerson also warned against blind acceptance of Chinese investment, warning African countries to “consider the terms of those investments” lest they “forfeit sovereignty”.
He also solicited African support in pressuring North Korea to give up its nuclear weapons.
“African nations can contribute to this goal,” he said.