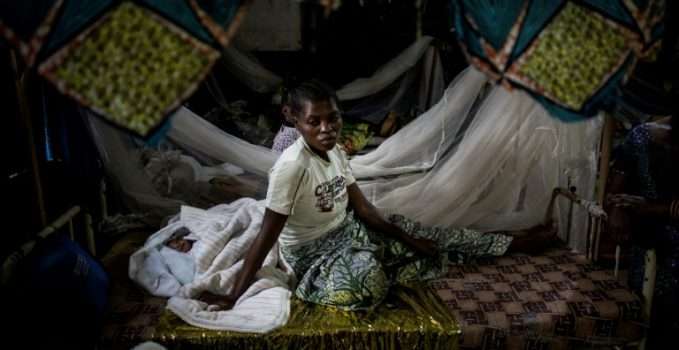 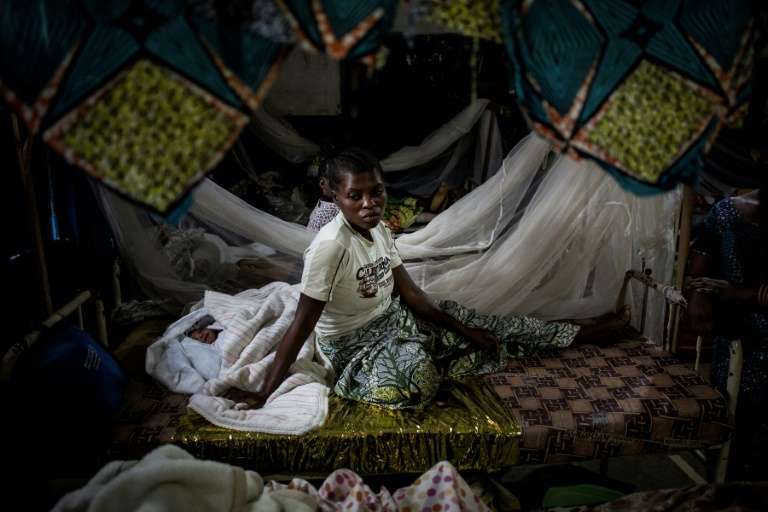 A Congolese woman rests with her newborn child at a clinic for displaced in Bunia. Tens of thousands of people have fled their homes since fighting between rival ethnic groups flared last December 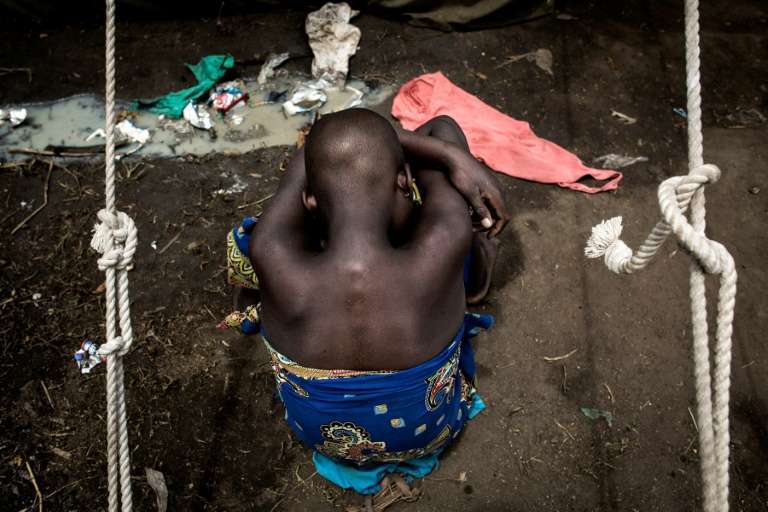 The assailants were methodical. They came in waves.
First came the ones who killed. Then came the ones who torched homes. And finally, the ones who looted anything of value.
Ahead of them, terrorised villagers fled for their lives — the latest victims of the ethnic conflict that bedevils Ituri, the troubled northeastern province of the Democratic Republic of Congo.
The bloodshed is part of a cycle of violence between the Hema and Lendu communities, cattle herders and farmers who have long fought over land — a conflict that has recently intensified as DR Congo struggles over its future.
At least 49 people were killed last week, bringing the death toll since mid-December to more than 100, while 200,000 people have fled their homes, according to estimates by humanitarian workers.
Many of them are women, frequently targeted for sexual assault, and children.
“The attackers were organised in three groups,” said Francoise Malosi, 54, recalling an attack on the Lendu village of Blukwa early last month.
“The first line was young men, armed with machetes, spears and arrows, and they were the ones who cut people’s throats,” she said at the Bigo medical centre in Bunia.
“After them was a group which set fire to people’s homes, and after that, there was a group which stole cattle and things of value,” she said.
“We fled into the bush, and spent three days sheltering there.”
– Flight into danger –
Doctors without Borders (MSF) last week said that in the previous month, around 40,000 people had fled across Lake Albert to neighbouring Uganda and 20,000 to Bunia, the capital of Ituri.
The Bigo medical centre is struggling with the human influx.
Nurse Baseke Kazimoto said the facility has treated 1,900 displaced people since February 9, including 450 pregnant women, 20 of whom have given birth.
At Lake Albert, the misery is complete. People fleeing the violence are crossing by canoe — a trip that takes between six and 10 hours and is filled with danger. Some have drowned, witnesses say.
Those arriving gather at Sebarogo in Hoima district, where about 1,000 people have fallen sick with cholera, causing 30 deaths, MSF said last Wednesday.
In Bunia, most of those displaced are living with host families. About 2,000 are holed up in tents around the regional hospital — six toilets and four showers are currently available for them, and more are being built.
There, a woman with five children, who had lost her husband, tried to build a shelter.
“I came from a village called Che, where attackers burned all our homes. We walked for three days — we have been sleeping outdoors, exposed to the mosquitoes, the rain and cold.”
– Children at risk –
Aid workers are deeply worried about food — some children are clearly malnourished.
“Every day, we need on average 500 kilogrammes (1,200 pounds) of rice, 300 kilos of beans and 40 litres (10.5 US gallons) of oil to provide just one hot meal per person,” said Pastor Ignace Bingi, a coordinator with a local NGO, Lasi.
Dirty children, barefoot and clad in dusty rags, wander around the camp.
Many have lost their parents or been separated from their families.
Lasi puts the figure at around 100. The UN children’s agency Unicef on February 23 said it had identified 70 unaccompanied children and 245 children who had been separated from their parents and who “need urgent help” at the hospital site.
Hema and Lendu groups have a long history of low-level violence over land disputes.
But in the late 1990s and early 2000s their fight became a broader, more brutal battle stoked by Rwanda and Uganda, which were eager to seize gold, diamond and timber along with influence as part of a wider war that played out inside DR Congo’s borders.
The latest flare up is part of a patchwork of unrest in the vast country suffering from growing insecurity and political tension.
New conflicts are erupting and old ones are reviving as President Joseph Kabila seeks to maintain his grip on power two years after the legal end of his second term.
Presidential elections, twice postponed, are now scheduled to take place on December 23.