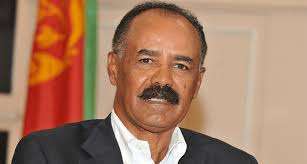 Eritrea and Ethiopia toward peace

ADDIS ABABA (Reuters) – Eritrean President Isaias Afwerki raised hopes of a breakthrough in one of Africa’s most intractable military stand-offs on Wednesday by describing recent peace overtures from arch-enemy Ethiopia as “positive signals”.

Speaking at a Martyrs’ Day event in the capital, Asmara, the 72-year-old Isaias said he was sending a delegation to Addis Ababa to understand the position of Ethiopia’s new prime minister, Abiy Ahmed, and “chart out a plan”.

It was the first response from Eritrea, one of Africa’s most closed and authoritarian states, to Abiy’s surprising pledge this month to honour all the terms of a peace deal that ended a 1998-2000 war between the Horn of Africa neighbours.

Adding to the positive mood music, Abiy’s chief of staff said the prime minister welcomed Isaias’s statement and promised the Eritrean delegation would be welcomed “warmly and with considerable goodwill”.

The border war nearly two decades ago drew comparisons to the First World War, with waves of soldiers forced to march through minefields towards Eritrean trenches, where they were cut down by machinegun fire. As many as 80,000 are believed to have been killed in total.

Disputes over the still-militarised frontier, in particular the town of Badme, have kept the two sides at loggerheads. Asmara had used the Ethiopian threat to justify hefty military spending and the long-term conscription that has caused hundreds of thousands of young men to flee, mostly to Europe.

However, Abiy, a 41-year-old ex-soldier who has outlined a series of radical reforms since taking over in March, stunned Ethiopians this month by saying he was prepared to honour international rulings that put Badme, which Ethiopia has refused to cede, in Eritrea.

Isaias said the concession, which is likely to meet opposition from hardliners in Ethiopia’s ruling EPRDF coalition, stemmed from the desire of both countries to reach long-term “peace and harmony”.

“The positive signals issued in these past days can be seen as an expression of this popular choice. We can say that the positive messages which have been circulating of late are signs of the people’s choice,” he said, according to the official translation of his speech on state EriTV television.

“Outside myopic considerations of public relations stunts and advantages, we will send a delegation to Addis Ababa to gauge current developments directly and in depth as well as to chart out a plan for continuous future action.”