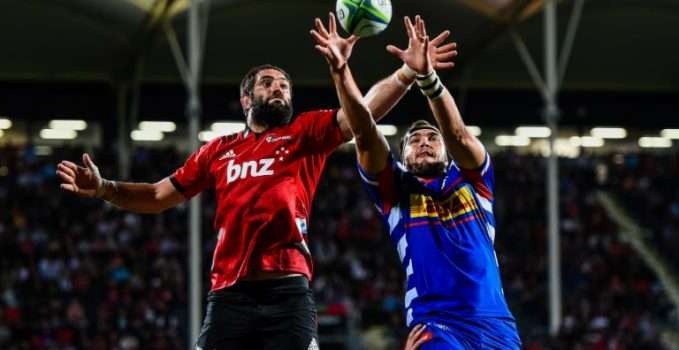 This season’s Super Rugby surprise package Melbourne Rebels maintained their perfect start, while defending champions Canterbury Crusaders succumbed to Wellington Hurricanes.
There were also several upsets as Auckland Blues downed Golden Lions in Johannesburg and the Jaguares overcame NSW Waratahs in Buenos Aires.
Here are five things we learned from Super Rugby’s fourth round:
Worst to first, Rebels now a force
The painful process of cutting Super Rugby from 18 teams to 15 has been successful if early results from perennial cellar dwellers Melbourne Rebels are any indication.
The Rebels picked up coach Dave Wessels and a slew of players from Western Force when the Perth outfit was axed.
They have integrated seamlessly and the Rebels are topping the table after their best-ever start with three bonus-point wins.
ACT Brumbies were their latest victims, as Wessels’ men claimed a 33-10 win over last year’s Australian conference winners.
Quite the turnaround for a team that finished last in 2017 after posting just one win.
‘Udon’ outshines big bro to undo Crusaders
Wellington Hurricanes’ pulsating win over Canterbury Crusaders was Beauden Barrett’s 100th game for the club, but it was little brother Jordie who caught the eye.
In just his second match back after shoulder surgery, the youngest of the Barrett boys was in sizzling form for the 29-19 victory over last year’s champions.
The 21-year-old showed no sign of a seven-month absence as he carved through the Crusaders’ defence and popped a no-look, back-handed pass to set up TJ Perenara’s try.
Jordie, nicknamed “Udon” by his brother because “he’s like a skinny white noodle”, then potted a 50-metre penalty to seal the victory.
Tana eyes turnaround after Blues win
Auckland Blues coach Tana Umaga hopes a come-from-behind 38-35 win over the Golden Lions can fire their season after yet another disappointing start.
The Blues were given little chance at Ellis Park against a Lions team that finished runners-up in 2016 and 2017, but roared back after trailing 21-3.
It was a welcome morale boost for the once-mighty Blues, who lost their opening two matches of the season and finished last in the New Zealand conference in 2017.
The result also relieves pressure on All Black legend Umaga, who is looking to take the Blues to the finals for the first time since 2011.
“Spirits are high … in terms of the confidence we can get out of it, it’s great,” he said.
“But we’ve still got to put in the work… we need consistency in our preparation so we can have that in our performance.”
Ledesma haunts ‘Tahs in Jaguares mauling
Argentina’s Jaguares snapped a three-match losing streak against NSW Waratahs as coach Mario Ledesma implemented the lessons about running rugby he picked up in Sydney.
Ledesma worked as a scrum guru with the Waratahs and Wallabies before departing for his homeland late last year.
The former Test hooker has tweaked the traditional forwards-based Argentinian approach and it paid off against his old side in Buenos Aires.
The Jaguares ran in four unanswered tries in the opening 20 minutes to set up a 38-28 win, their first of the season, and leave the highly fancied Waratahs stunned.
Australian pundits labelled the Waratahs’ performance “a coach killer” and Daryl Gibson will need more commitment from players when they face the in-form Rebels next up.
Errors give cranky Kolisi deja vu
Captain Siya Kolisi’s frustration was palpable after his Western Stormers again failed to take their chances in a 33-15 loss to Otago Highlanders in Dunedin.
The Stormers played well but slumped to their 10th straight loss on New Zealand soil and Kolisi said they shot themselves in the foot with unforced errors.
“It’s the same story every time … we didn’t hold onto the ball, we didn’t come away with points when we got to the 22 and they did,” he said.
“We can’t keep making the same mistakes every week.”
The Stormers now have only one win from four, despite dominating territory, and Kolisi warned their season was on the line against the Blues in Cape Town this weekend.
“(We lacked) patience and execution,” he said.
“We can’t keep saying we’re going to learn from this, we don’t have much time. I’m proud of the way we started but we have to get it together now.”