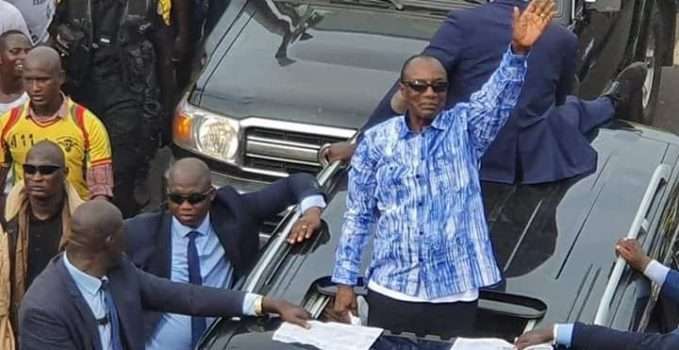 Guinea: Alpha Condé, “I dream of a constructive opposition” Conakry – The return to the country after a stay in Moscow and Paris was a popular celebration during which the Guinean people wanted to express their support and encouragement to move forward towards what everyone considers the father of the country. A resounding welcome worth more than a thousand speeches and testifying to the consent, esteem and love enjoyed by the President of the Alpha Condé Republic. In this exclusive interview, we asked the former Sorbonne professor to take stock of the situation.

Back in Conkry, you had an extraordinary welcome. How does it feel? How did you feel? “I have indeed seen many Guineans on the course. It shows several things. The first is that I am not as isolated as they say! Whether or not some “observers” who look at the small end of the spyglass from their ivory tower and take for granted certain statements by leaders without any idea of thinking only of manipulating certain elements. In the last few days, I believe, we have noticed that some photos of the demonstrations in mid-October were either faked or from other countries. But let’s move on. More seriously, it shows above all that the People of Guinea are interested in the debates, that they want to move forward. Because, behind the slogans I heard, behind the signs I read, what is it? A tremendous confidence in the future. A desire to become a strong and proud country. Strong of its potential and abilities, proud of all its sons and daughters without distinction. In the eyes of those who were waiting for me, what could you see? I saw smiles, it doesn’t hurt, but especially the desire I felt, this desire to move forward, not to fall back into sterile quarrels. Guinea, all of Guinea, the Guineans, all the Guineans, that’s what the people who were there and many others told me.” The constitution scares the opposition, what is the problem?

“Some opposition leaders, who were in the Prime Minister’s Office under Lansana Conté – it has been a long time, however – and who have brought the country to its knees, are critical. It is their right to criticize. The opposition is there to oppose and that is good. What are they saying? What do they propose? Nothing. Nothing new, some are recycling their 2015 presidential slogans, others are opposing without really knowing why in the name of selfish interests. It is always the same old outdated patterns, the same old refrain, that I hear.

It is sad to say, but I dream of a constructive opposition, an opposition that proposes, that stimulates the debate, that puts forward real arguments, that speaks to all the people, that thinks about Guinea as a whole. Instead, we always find the same narrow words, the same anger, the same defence of particular interests. The problem with the opposition is simple. She has absolutely nothing to offer. Of course, it is easier to stay focused on the past, to want to change nothing, than to look to the future. The opposition does not see that everything has changed and is changing, that Africa and Guinea are changing. No, she doesn’t want to see it, she prefers to stay on obsolete patterns and ways of doing things from another time. That is unfortunate and I regret it. That being said, my door remains open to all those who want to sit down to discuss, to move forward together across divisions, across special interests.” The referendum is about asking Guineans whether or not they want a new constitution?

“What is the question behind this referendum? It is simple. Do we want, yes or no, a strong Guinea, a prosperous Guinea? A modern Guinea? Do we or do we not want to have institutions adapted to the challenges of tomorrow? Or we might prefer to live with a flawed constitution, adopted quickly in 2010, under the weight of circumstances. Constitution of 2010 on which the People have not been consulted, I would like to remind you.

Seriously, we need a Constitution that everyone can say “it was the people of Guinea who chose it”, “it is our common good”. A constitution that will be a model for all Africans and that our entire continent will envy us, just as Guinea was envied at the time of the Sun of Independence.

A constitution that will reaffirm the fundamental freedoms of Guineans, particularly those of the most modest and vulnerable, to give them even greater means to assert their rights. It will better protect, guarantee new rights for all and establish safeguards against abuses wherever they may come from. It will have to be a modern constitution with real progress such as the abolition of the death penalty or the prohibition of genital mutilation and early marriage. It will meet the challenges ahead for Guinea and Africa, whether in the fight against climate hazards or against religious fanaticism and terrorism of all kinds. And it will give a greater place to our brothers and sisters in the diaspora in the development of our country.”

What about a possible application in 2020?

“Frankly, that’s not the question, not even the time. I am nothing compared to the challenges facing our country. The question is not what Alpha Condé is going to do, no matter what the gossip says, my only concern is today’s Guinea and the one that must come”.