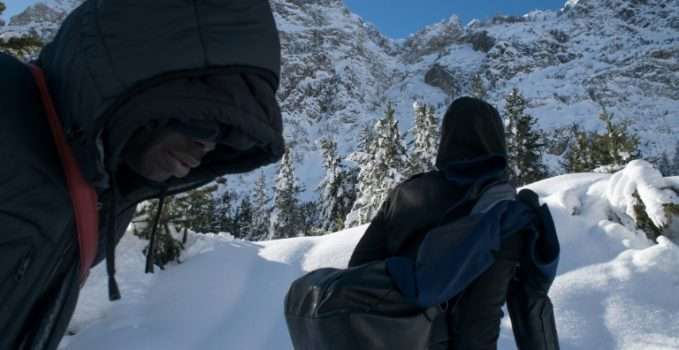 In the Alps, traffickers prey on migrants and rescuers alike 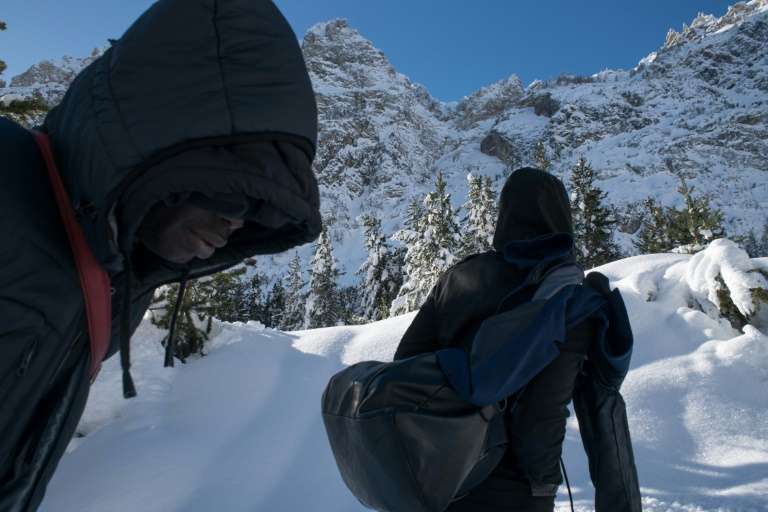 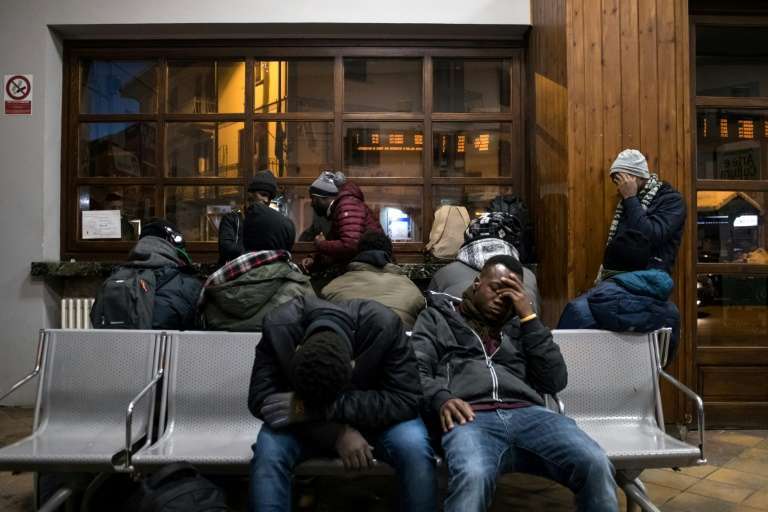 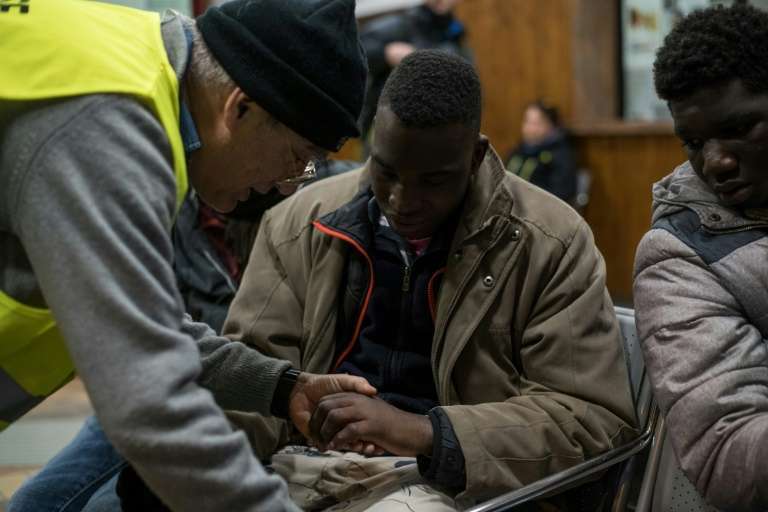 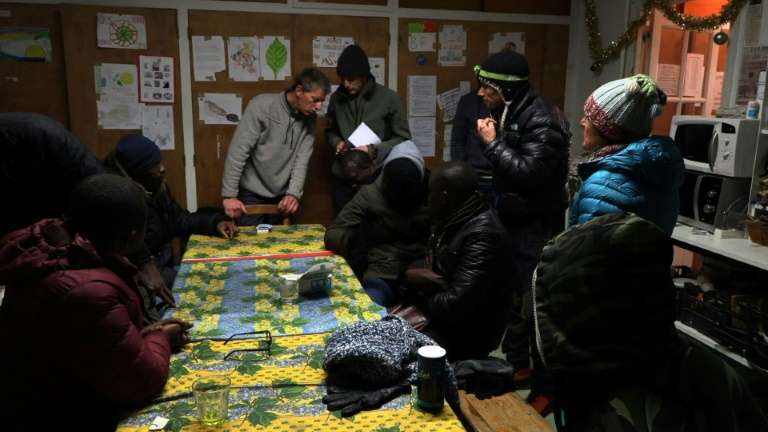 Migrants rest in the waiting hall of the train station in Bardonecchia, an Italian mountain town where many begin their crossing in to France

Five African migrants stumble through the snow, exhausted and numb, abandoned hours earlier by a smuggler who left them to make their own way down the mountain from Italy into France.
They are among dozens who have been tricked in recent weeks into paying hundreds of euros to people traffickers who promised them a comfortable car ride across the border.
The Montgenevre Pass isn’t steep, but the snow is deep, and the young men’s trainers and jeans do nothing to protect them against the biting minus 10 C (14 F) chill.
If they get lost, it might take hours to cross — long enough to freeze to death.
By the time members of the French volunteer group Tous Migrants (We Are All Migrants) come to their rescue in the black of night, the youths are broken.
“I haven’t slept for four nights, I can’t take it anymore,” says Abdul, a tall, thin Malian teenager, who trembles uncontrollably throughout the 40-minute car journey to the shelter run by Tous Migrants in the mountain town of Briancon.
Thousands of young men from francophone west Africa have trudged across these mountains over the past two years, dreaming of jobs in France.
In recent months, as news about the route filters back to Africa, the arrivals have gained pace.
Since July, nearly 3,000 have passed through the modest shelter run by Tous Migrants where volunteers distribute hot meals, dry clothes and a mattress to bunk down on.
But recently both the migrants and the volunteers have found themselves at the mercy of a new phenomenon: smugglers based in northern Italy who dump migrants — including, on occasion, mothers with babies — in the Alps, leaving them to fend for themselves.
The smugglers, who are also French-speaking west Africans, charge up to 350 euros ($430) to sneak people into France.
But once the group reaches the Italian border village of Claviere by train and bus, the car that is supposed to carry them on the last leg of their journey to Paris never materialises.
The smugglers instead call the French volunteers to notify them that a group of Africans is heading their way — and then turn on their heels.
– ‘You trust them blindly’ –
Realising they’ve been duped — sometimes by fellow nationals — is yet another humiliation for the youths, after a harrowing journey across the desert, through Libya, and over the Mediterranean in rickety boats that often sink.
“You trust them blindly,” said a 26-year-old from Cameroon, who asked to be called Steve to protect his identity, in shock after having to cross the mountain with his eight-year-old son.
Steve handed over the 250 euros he earned picking fruit in Sicily to a smuggler who abandoned his group of 20 in Claviere.
They waited for four hours in the cold, “until we couldn’t feel our feet any more”, before eventually setting off, ill-equipped and with barely any idea of where they were going.
The rescuers are angry at the idea that their well-intentioned efforts may be greasing the migrant smuggling machine — and their phone numbers are sometimes sold as part of the “package” offered to migrants.
“Our mission is to rescue people who are in danger on the mountain, not to act as a taxi for traffickers,” said Philippe Wyon, one of around a dozen volunteers who regularly carries out mountain rescue missions.
Tous Migrants reluctantly decided in mid-February not to answer smugglers’ phone calls any more, worried about inadvertently breaking the law if found to be cooperating with criminal gangs.
Instead, they’ve been carrying out ad hoc search operations on the mountain, hoping simply to bump into migrants so they can bring them to safety.
– In failure, dishonour –
Most of those crossing the Alps in recent months have been from Guinea or Ivory Coast, both former French colonies.
Few have any hope of being granted refugee status, being considered economic migrants for fleeing a crippling lack of jobs and opportunities at home rather than war.
But that message has been slow to filter through — partly because those who make it through do not want others to know how much they suffered and those who get deported keep a low profile.
Failure to make it “spells tragedy for these young people,” Ivorian sociologist Fahiraman Rodrigue Kone, author of a report on returning migrants, told AFP, adding: “It’s seen as a sort of social death and a dishonour”.
At 16, Cellou has already seen a lifetime of suffering. The Guinean teenager was kidnapped, imprisoned and abused by armed Libyan gangs over the course of his long voyage to France.
“I came here to study and train as a chef. I love cooking!” he says.
Some, like Ibrahim, have already had their dreams dashed.
The 22-year-old Guinean was left paralysed down one side of his body after plunging 40 metres (130 feet) while attempting to cross a mountain pass in August and has been in several hospitals ever since.
He has a message for west African parents who pack off their sons to make their fortune in Europe: “This journey, these mountains, are too dangerous. Don’t encourage your children to come here.”