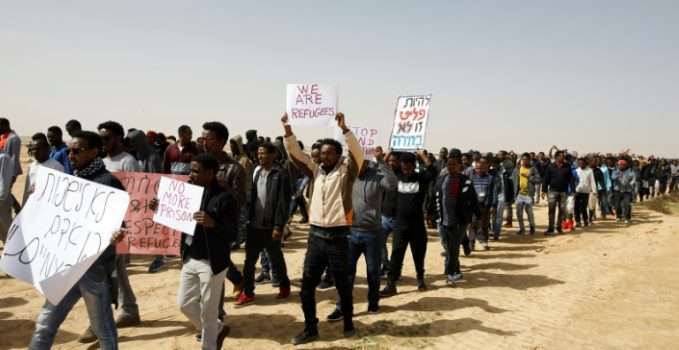 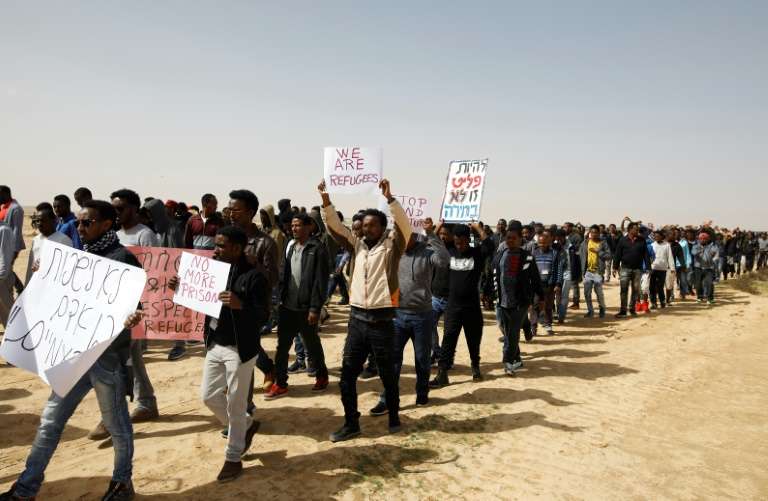 African migrants from Eritrea sit in the street in the southern district of Israel’s Tel Aviv on April 5, 2018

Israel announced Monday it had reached a deal with the UN refugee agency to cancel a controversial plan to deport African migrants and replace it with a new one that will see thousands sent to Western countries.
A minimum of 16,250 migrants will be resettled in unspecified Western nations under the agreement announced in a statement from Prime Minister Benjamin Netanyahu’s office.
Netanyahu was to speak about the plan in an address later in the afternoon.
Netanyahu in January announced the implementation of a programme to remove migrants who entered illegally, giving them a choice between leaving voluntarily or facing indefinite imprisonment with eventual forced expulsion.
According to interior ministry figures, there are currently some 42,000 African migrants in Israel, half of them children, women or men with families, who were not facing immediate deportation.
They are mainly Sudanese and Eritrean.
As the migrants could face danger or imprisonment if returned to their homelands, Israel offered to relocate them to an unnamed African country, which deportees and aid workers said was Rwanda or Uganda.
They had initially been given a deadline of April 1, but Israel’s supreme court suspended the plan on March 15 while it continued to examine it.
The statement on Monday said the new plan meant there was no longer a need to send migrants to unnamed third countries.
The plans had drawn sharp criticism from the United Nations refugee agency as well as from some Israelis and rights activists.
– ‘Shame’ –
The migrants’ presence in Israel has become a political issue, with Netanyahu referring to them as “not refugees but illegal infiltrators”.
Religious and conservative politicians have portrayed the presence of Muslim and Christian Africans as a threat to Israel’s Jewish character.
A group of residents of southern Tel Aviv, where many of the migrants have settled, immediately denounced the new plan in a statement, calling it “a shame for the state of Israel.”
Under the new five-year plan, Israel will “regulate” the status of those not being resettled — signalling they will be allowed to stay at least temporarily.
It also said a committee will be established to come up with a “rehabilitation plan” for southern Tel Aviv.
Migrants began entering Israel through what was then a porous Egyptian border in 2007. The border has since been strengthened, all but ending illegal crossings.
Holot, an open facility where inmates were free to leave during the day but had to return at night, was opened in 2013 with the aim of siphoning migrants away from the cities.
Israeli officials had said that no one they classify as a refugee or asylum-seeker would be deported, though the process of granting asylum has been criticised as extremely slow and biased against claims.
Only a handful of asylum claims have been approved in recent years.
Those opposed to the original plan included Holocaust survivors who say the country has a special duty to protect migrants.