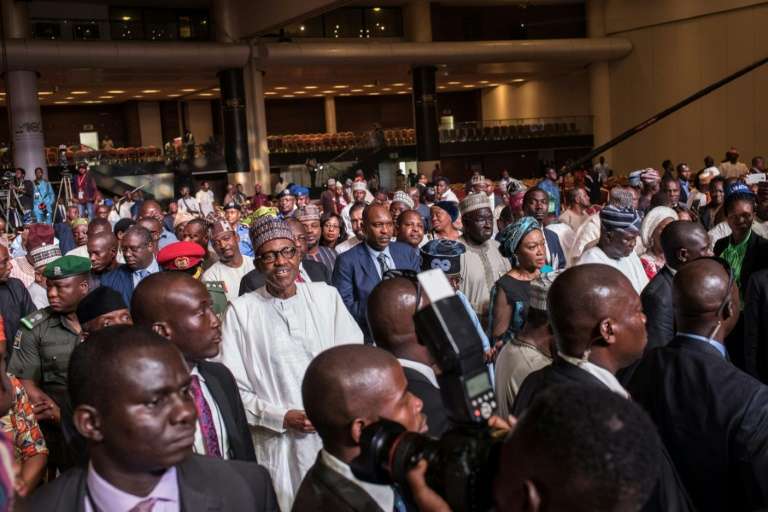 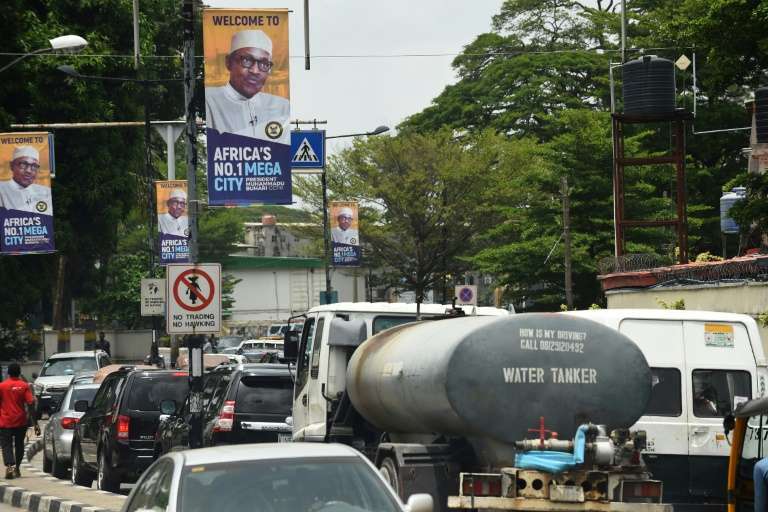 Lagos, Nigeria’s thriving economic capital, was on lockdown Thursday for President Muhammadu Buhari’s first official visit to the city as campaigning for next year’s presidential polls heats up.
In front of the cameras, it was all smiles between Buhari and Bola Tinubu, a political grandee who played a pivotal role in securing the key region surrounding Lagos for the ruling All Progressives Congress (APC) party in 2015 but has since been sidelined.
Buhari, from Nigeria’s mostly Muslim north, has not formally declared if he is running for re-election, but if the 75-year-old hopes to win, he will need to have the support of the prosperous southwest, and — by extension — Tinubu.
“I’m happy to be here with you to celebrate the birthday of my friend and political partner,” Buhari said before launching into a short speech.
“We seek to replace corruption with correctness, insecurity with safety and poverty with prosperity,” he said. “Tomorrow can be better than today and good can triumph over evil.”
Tinubu, the former governor of Lagos state, told the crowd: “We have a nation to rescue, we have a good leader to emulate, we have hope.”
Last week, Buhari’s government announced that they were negotiating for a ceasefire with Boko Haram, but cautioned that divisions in the jihadist group posed a challenge to progress.
– Lagos on lockdown –
The president rarely travels outside of the capital Abuja, home to parliament, and has visited only a few of Nigeria’s 36 states over the past three years.
The city of over 20 million people has been virtually shut down in preparation of Buhari’s visit, with the Lagos state government declaring Thursday a “work-free day”.
Car sirens blared outside the swanky Eko Hotel in Lagos hosting Tinubu’s 66th birthday “colloquium” gathering the country’s business, royal and celebrity elite.
Lavishly dressed guests wearing billowing robes and crystal-encrusted gowns flooded down a green carpet to make a raucous push at the entrance to the cavernous conference hall.
Inside, Africa’s richest man, sugar and concrete tycoon Aliko Dangote, sat in the front row.
– Political ‘prize’ –
“It’s hard to look at Nigeria at the moment except through the prism of elections,” Antony Goldman, of Nigeria-focused PM Consulting, told AFP.
“Although he (Buhari) hasn’t yet declared if he will run a lot of things make it look as if he’s trying,” Goldman said.
“Lagos is a prize, politically, economically and symbolically.”
After three years in power, Buhari may be working to “mend fences” with Tinubu, said Cheta Nwanze from SBM Intelligence, a Lagos-based advisory firm.
“The fact that he came to Lagos is an appropriate gesture,” Nwanze said, “but it remains to be seen if that gesture is accepted.”
That will only become clear in the second half of this year when the ruling party holds its presidential nominating convention.
Lagos, a banking hub that is home to a burgeoning technology sector and countless start-ups, is the exception to the rule in Nigeria, which is struggling to recover from its first recession in 25 years.
Buhari, who was voted into power in 2015, was criticised for worsening the economic crisis by introducing a currency peg that spooked investors and depleted foreign reserves.
There are also questions about his health after he spent much of 2017 in a London hospital with an undisclosed illness.
In January this year, former president Olusegun Obasanjo asked Buhari not to run again, saying in a statement that “Nigeria needs to move on and move forward.”
On Wednesday, former vice president Atiku Abubakar announced that he will run for president in 2019.
The election is expected to take place in February.