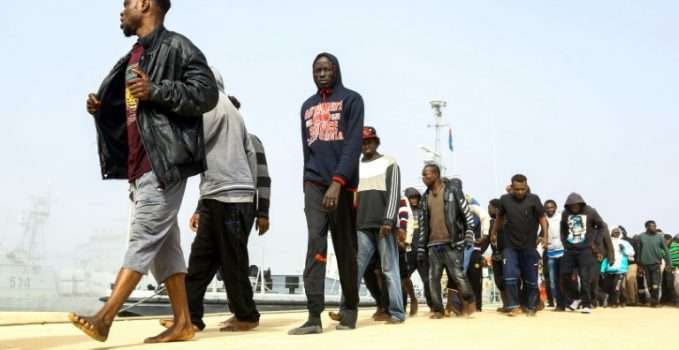 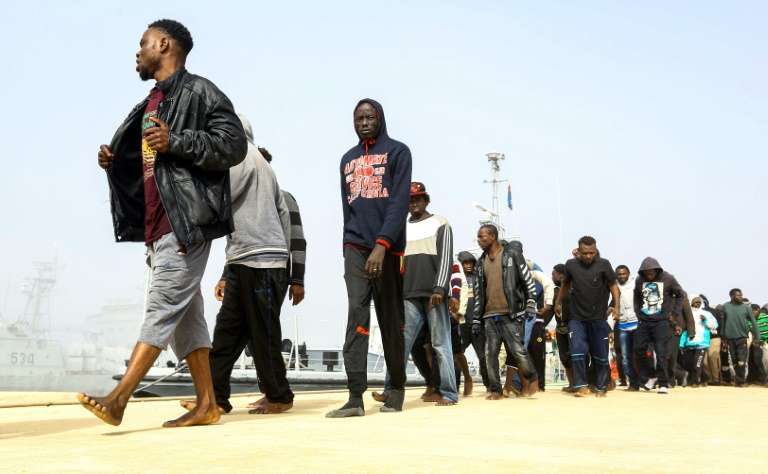 A file picture taken on March 10, 2018 shows African migrants rescued from a ship off the coast of Libya disembarking at a naval base

Libya has issued arrest warrants for more than 200 Libyans and foreigners suspected of involvement in a smuggling network for Europe-bound migrants, the attorney general’s office said on Thursday.
“We have 205 arrest warrants for people (involved in) organising immigration operations, human trafficking, (cases) of torture, murder and rape,” said Seddik al-Sour, the director of the attorney general’s investigations office.
The trafficking ring is alleged to include members of security services, leaders of migrant detention camps, and embassy officials from African countries based in Libya, Sour said.
Libya has descended into chaos since the fall of Moamer Kadhafi’s regime in 2011, and has become a hub for hundreds of thousands of sub-Saharan African migrants trying to reach Europe by sea.
The oil-rich country ruled by a web of militias and two rival authorities has routinely been criticised for abuses against migrants.
Sour said investigations into smuggling networks were carried out in coordination with the Italian prosecutor’s office.
Rome and Tripoli agreed in December to form a joint unit to combat smugglers and human traffickers involved in the intelligence, coastguard and justice sectors of each country.
Sour said his office had established a direct link between the smugglers and Islamic State group jihadists.
The latter take advantage of trafficking networks to move from one country to another, to find refuge or to seak medical treatment, he said.
The official also said a probe was still ongoing into a CNN television report in November of African migrants being auctioned off as “slaves” in Libya.
Sour said that according to the investigation, traffickers do “sell” migrants to each other, but not as slaves.