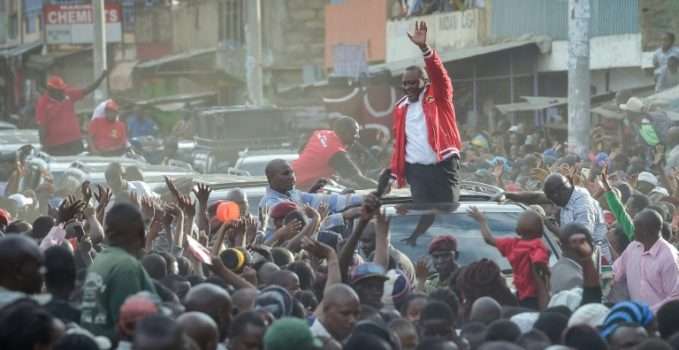 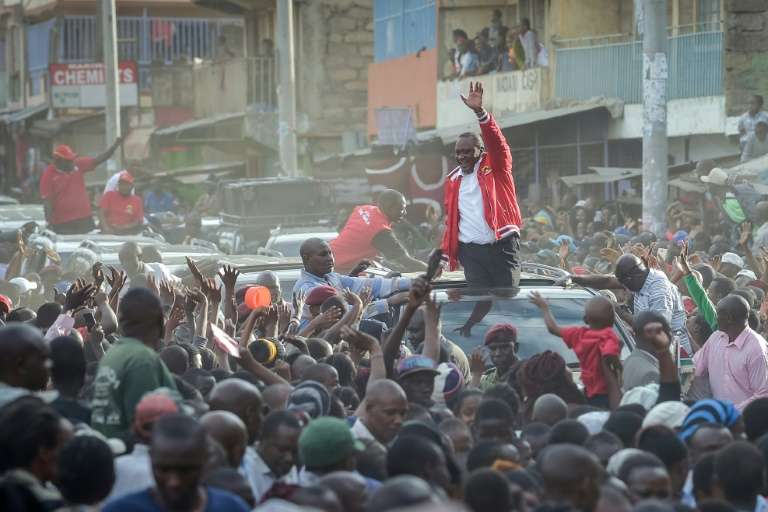 Kenya’s President Uhuru Kenyatta gestures as he speaks from a car roof during a political rally in Nairobi, on October 23, 2017, ahead of the repeat elections as supporters cheer him 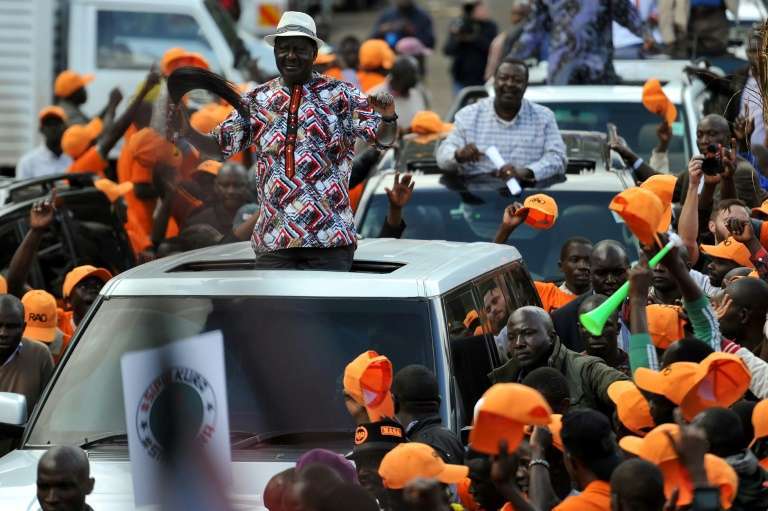 Kenya’s ruling Jubilee Party on Wednesday denied that Cambridge Analytica had stage-managed the victory of President Uhuru Kenyatta in highly disputed and deadly 2017 elections.
The British firm at the centre of a scandal over the improper use of Facebook data in US President Donald Trump’s election 2016 campaign, has also come under the spotlight in Kenya, where it worked on Kenyatta’s campaign last year and in 2013.
An expose aired by Channel 4 television in the United Kingdom included hidden camera footage of company managing director Mark Turnbull bragging about their role in Kenya’s elections.
“(In) the campaign which we ran in 2013 and 2017 for Kenyatta, we have rebranded the entire party twice, written their manifesto, done two rounds of 50,000 surveys… research, analysis, messaging, then we’d write all the speeches and we’d stage the whole thing; so just about every element of his campaign.”
Jubilee vice-chairman David Murathe, however, denied that the company had played any significant role.
He said the party had never dealt directly with Cambridge Analytica, only their sister company SCL Elections, which is also managed by Turnbull.
“There’s nothing there,” Murathe told Kenya’s Capital FM News radio. “We engaged the services of several marketing companies. All they (SCL) did for us was branding; billboards, T-shirts and the like. They had no involvement in our social media campaign.”
Kenya’s 2017 election season saw one presidential poll annulled by the courts and the re-run boycotted by the opposition, with over 100 people killed, most of them shot dead by police during protests.
Opposition leader Raila Odinga insisted that victory had been stolen from him, although recently he and Kenyatta pledged to reconcile in a bid to heal the country’s divisions.
However the head of Odinga’s National Super Alliance (NASA) secretariat Norman Magaya said the revelations about Cambridge Analytica were proof that Jubilee employed underhanded tactics to steal victory in both elections.
Magaya said this was made all the more deplorable by the campaign’s intent to inflame already heightened ethnic tensions.
Cambridge Analytica has been accused of being behind a toxic campaign ad unleashed online just weeks before national elections presenting a dystopia in which Odinga won the vote and plunged the nation into a violent and inept dictatorship.
Under this scenario, tribes would be set against one another while terrorists run riot.
“Here it can lead to war,” said John Githongo, a veteran anti-corruption campaigner at the time. “The wrong video, the wrong information, it can go out of control.”
In the Channel 4 expose, Turnbull promoted strategies that prey on people’s fears stating “elections are not won on facts.”
Magaya said NASA had constituted a legal team of five people to work together with IT experts to determine the extent of Cambridge Analytica’s role in the elections and if legal action should be taken.

Tags : IT, Kenya, MEDIA, politics, US