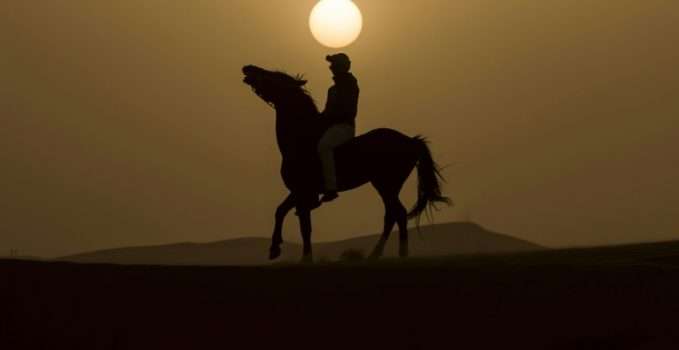 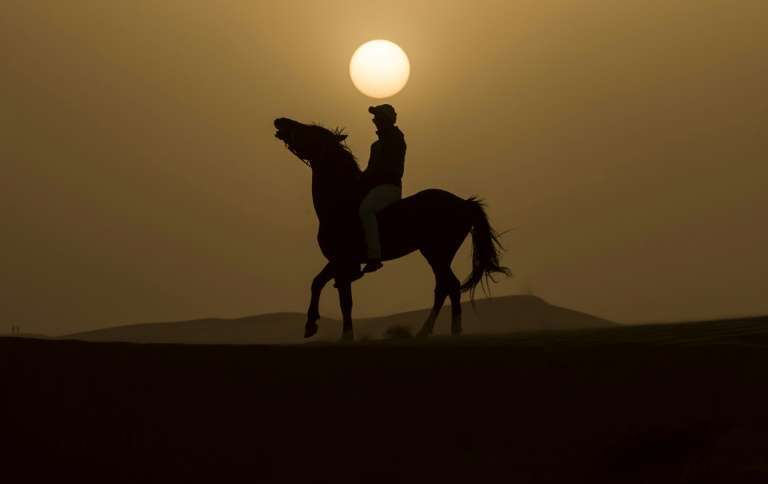 A rider competes during the “Gallops of Morocco” equestrian race in the desert of Merzouga in the southern Moroccan Sahara desert on March 1, 2018 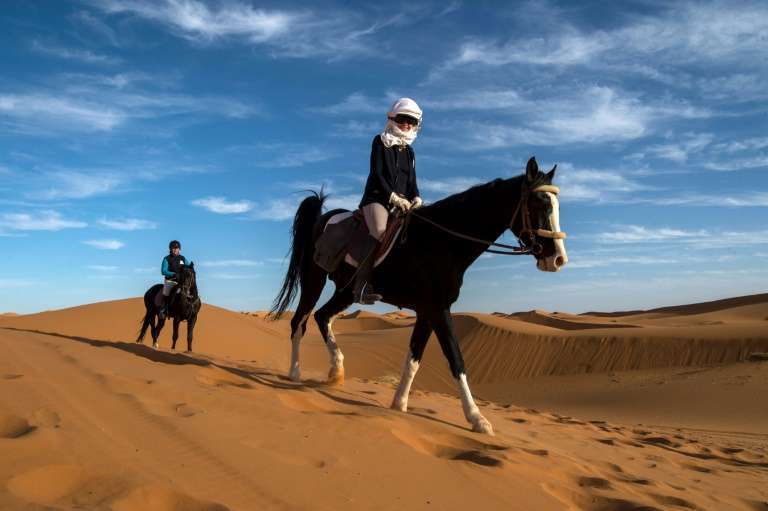 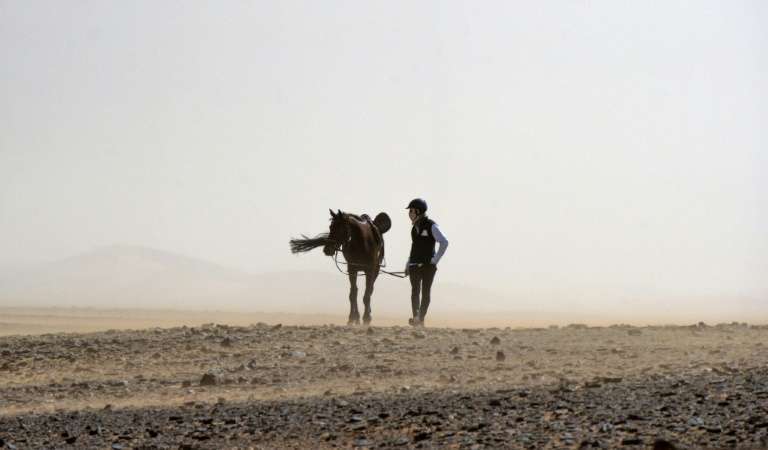 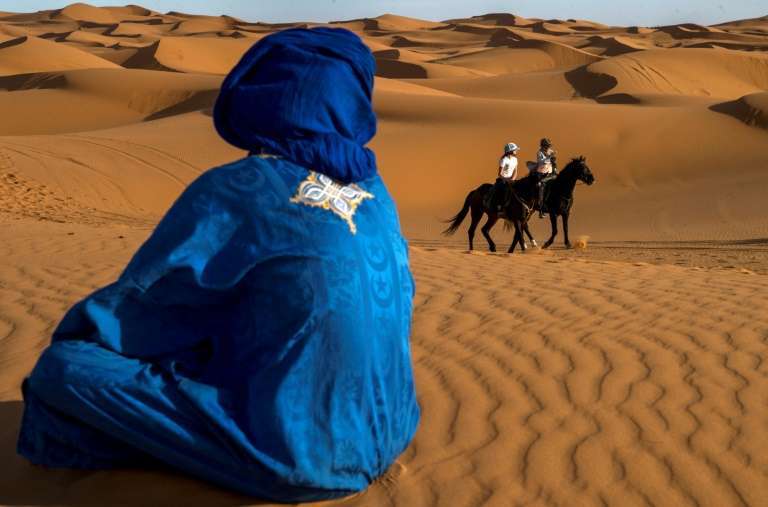 Competitors ride Barb stallions during the “Gallops of Morocco” equestrian race near Erfoud in the southern Moroccan Sahara desert on March 2, 2018 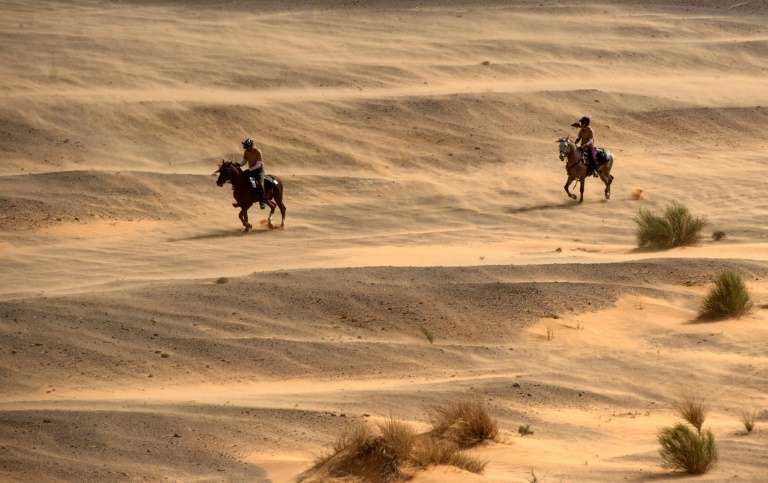 Battling gusts of sandy wind, riders from across the world struggled to control feisty stallions as they raced in the first Gallops of Morocco, a desert endurance challenge.
In a country with an ancient history of horsemanship, the event in the wilderness of Merzouga was the first of its kind — a six-day test of stamina, navigation and teamwork.
Competitors spend four to seven hours a day in the saddle, covering up to 30 kilometres (18 miles) of rough terrain a day.
“You need a certain physical resistance,” said Deborah Amsellem, 30, who headed from Toulouse, France, with four friends to take part in the race near the oasis town of Erfoud.
“It’s not very technical, but you’re riding stallions, real alpha males,” she said.
Riders use stopwatches to pace themselves and GPS devices to find their way through the sandy plains, deep dunes, rocky hills and passes.
The unforgiving terrain and fickle weather are not the only challenges: competitors must ride Barb stallions they have never met.
The North African breed, originally a warhorse, is known for its toughness and stamina but also for its hot temper.
Fifteen teams took part in the late February adventure, made up of 80 horse-lovers, enthusiasts of everything from trail riding to polo.
Organisers say the event is designed for “rather hardy riders who should be in good physical condition and have a feel for horses in order to cope with the distances.”
– ‘Sense of space’ –
Saif Ali al-Rawahi, coach of a team from Oman, described the event as “very difficult”.
“There are kilometres in the mountains and in the desert,” he said. “The horses have to ride on high dunes, the weather is not so good, very windy. It’s difficult for horses and riders.”
Oman was the site of the first “Gallops” race in 2014, and Rawahi’s group of five soldiers from the Gulf sultanate’s cavalry are accustomed to endurance races. Even they had to make do with coming fifth.
“The trek is not just a race for professionals,” said Benoit Perrier, a race official.
On the first day alone, several riders fell off their horses and some gave up entirely — while others said they were exhausted but enjoying the challenge.
“If we wanted to ride the same distance in the Lille region (northern France), there would be highways and barbed wire,” said French businessman Gregoire Verhaeghe.
“Here we have a real sense of space.”
Having taken part in the Paris-Dakar rally four times, he said he loves the desert and made no complaint about the bad weather.
His family’s team came first.
Riding unknown horses, Barb stallions specially brought in from across the country for the occasion, is part of the experience.
Omar Benazzou, an official from Morocco’s equestrian governing body SOREC, said he had headed to the event “out of curiosity”.
The Barb, long associated with North Africa’s Berber ethnic group, “is a horse with a big heart, sturdy, docile, resilient and can cover long distances,” he said.
– Adventure destination –
Morocco is determined to develop equestrian tourism, benefiting from its unique breeds to attract new visitors.
The country largely escaped the chaos unleashed by the Arab Spring uprisings, remaining safe and stable enough to attract an influx of tourists.
The southern desert is a favourite destination for those seeking an outdoors experience.
“You have hiking, car rallies, mountain biking and discovery trips,” said Sadoq Abdedaim, owner of the upscale hotel chain Xaluca.
Claire Biyache, a French rider with eight years’ experience who took part in the Gallops event, praised the “beautiful” surroundings.
“We’ve seen lots of very different scenery, sometimes very black, very mineral, sometimes dunes, sometimes oases,” she said.
The adventure came at a price. For Deborah, a student, the $5,200 (4,200 euro) fee was “a real stretch”.
But Dato Beh Chun Chuan, a Malaysian businessman who flew to Morocco specially for the race, said it was “very cheap”.
“The most important thing is to have fun and have friends,” he said. “Winning is not my main agenda in life.”
The 62-year-old millionaire owns a polo club with 54 horses and employs four Argentinian riders to play with him.
His team at the desert race included fellow businessmen and bankers with “money to spend”, he said.
His only regret was that his bivouac was not comfortable enough.
He was not able to rent a helicopter to return to the hotel for the night.