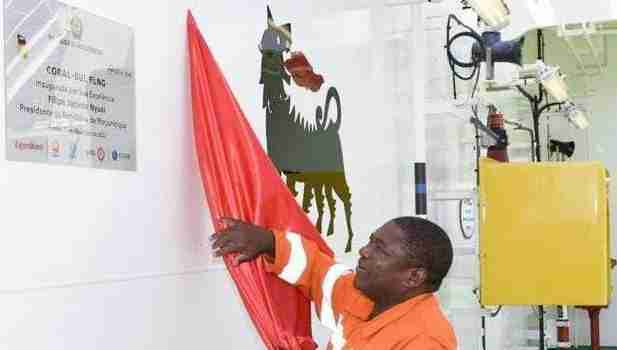 Mozambique in the club of big gas exporters, President Niusy opens up to new projects

At the inauguration in Pemba, President Nyusi explained that ‘the time and economic conditions, as well as the technological capabilities, are in place to authorise new energy projects’. The first liquefied coral floating lng gas, operated by Eni, is destined for Europe.

Ready to take up its seat as a non-permanent member of the UN Security Council next January, Mozambique from today takes another important step forward by definitively becoming one of the largest global players in liquefied natural gas (LNG). In the north of the country, in Pemba, Mozambique’s President Filipe Nyusi inaugurated the Coral South FLNG platform, the first to explore the vast reserves discovered in the Rovuma Basin, in the province of Cabo Delgado. Not only that, Nyusi said he is ready with Eni, the Italian energy giant that first worked the Mozambican deposits, to start new research and extraction activities as well as biofuel energy production.

‘We are convinced,’ said President Nyusi, ‘that there are the time and economic conditions, as well as the technological capabilities, to authorise new energy projects. Indeed, we have demonstrated that it is possible to work here in a stable, transparent and reliable environment’.

Operated by the Italian multinational company ENI, the Coral South platform is the first in the world to explore for natural gas in ultra-deep waters, and its entry into operation will help to bridge the energy deficit plaguing global markets, with a greater focus on Europe. It should be noted in this regard that the first liquefied gas from the Coral Floating lng, operated by Eni, is destined for Europe.

After inaugurating the project, President Filipe Nyusi explained that the launch of the Coral South FLNG is the clear result of excellent cooperation between ENI and partners, namely EXXONMOBIL of the US, KOGAS of South Korea, GALP of Portugal, CNPC of China and ENH of Mozambique.

After emphasising that Mozambique’s project is the third largest in the world, he explained that “Mozambique will have a significant position in LNG as part of the energy transition and that the Mozambique model will become a case study”. Indeed, Nyusi mentioned that Asia will need gas and especially LNG, that the US will have to review its energy plans, and that there will still be a lot of demand for gas in the short term. Turning then to the numbers, President Nyusi pointed out that Mozambique could export 83 billion cubic metres by 2025 and that by 2050 Mozambique could become the world’s largest gas exporter.

The Mozambican statesman then pointed out that the Coral South FLNG platform is part of the approved development plans for Area 04 of the Rovuma Sedimentary Basin, which includes another development consisting of two onshore liquefaction modules.  In total, Area 04 has a combined capacity of over 15 million tonnes per year, which is five times more than the development inaugurated today.

Filipe Nyusi also recalled in his inaugural speech that over six years ago the Coral South FLNG project represented the conception of an almost new technology, being the third project in the world of the same nature after Malaysia’s and Shell’s Prelude project in Australia.

In 2017, it stood out as the only country in the world to have matured the decision to invest in the liquefied natural gas (LNG) sector. This reality has cemented good expectations and increased confidence indices on the evolution of the Mozambican economy. The Mozambican President also said that with today’s act, the country marked a memorable day for its more than 30 million inhabitants in a long journey that began in June 2006.

Nyusi, who ten days ago had announced, through a communication to the nation and the world, the start of gas exports, said today that with the start of the FNLG project, all doubts about the country’s ability to receive multi-billion dollar investments have been dispelled.  In fact, the Coral South platform represents an investment of seven billion dollars.

ENI, the managing operator of the Coral South FLNG represented by Coo Guido Brusco, believes that the venture inaugurated today is a reference point for the gas industry and will project Mozambique onto the world LNG scene, paving the way for a profound transformation of the country’s economy through the development of gas resources, an important contribution to the security and diversification of the offer of this product in the European market. This is why from Pemba ENI declares itself ready for a new project, and the conditions seem favourable. Now the world sees Mozambique as a country where even big business dreams can come true.

Franklin CUDJOE@lordcudjoeIs this the Beginning of the End of Ghana’s Fiscal Crisis? - Imani Africa imaniafrica.org/2023/01/is-thi…41 minutes ago29 January 2023

JasonNjoku@JasonNjokuWow. Over funding is like obesity twitter.com/debarghya_das/…10 hours ago29 January 2023

Ngozi Okonjo-Iweala@NOIwealaGreat meeting with staff of the @wto’s Administration and General Services Division. You make the place run! Thank… twitter.com/i/web/status/1…2 days ago27 January 2023

Ngozi Okonjo-Iweala@NOIwealaReconnecting with Ambassador @Hildaalhinai in her new capacity as Secretary General of the Arab-Swiss Chamber of Co… twitter.com/i/web/status/1…2 days ago27 January 2023

Zwelinzima Vavi@Zwelinzima1Not even the Generals are safe! pic.twitter.com/BKYfpzb7gr2 days ago27 January 2023

El-Ghassim Wane@elghassimwRT @UN_MINUSMA: Report on the situation in #Mali 🇲🇱 before the #UNSC by @elghassimw, Head MINUSMA. 📌Watch it 📺 live today from 3PM UTC ➡️…2 days ago27 January 2023

Acha Leke@achalekeRT @YuitoYamada_: What does it mean to accelerate #sustainable and #inclusive growth? Hear what our @McKinsey partners from around the worl…3 days ago27 January 2023

Ngozi Okonjo-Iweala@NOIwealaWith H.E President @alain_berset of the Swiss Confederation. WTO is grateful for the excellent host Switzerland is.… twitter.com/i/web/status/1…3 days ago26 January 2023

El-Ghassim Wane@elghassimwIn New York to brief the #SecurityCouncil on @UN_MINUSMA. Fruitful discussions with the African members of the Coun… twitter.com/i/web/status/1…4 days ago25 January 2023

El-Ghassim Wane@elghassimwRT @Lacroix_UN: I am grateful for the work of the Egyptian all-women Search & Detect team #ServingForPeace with @UN_MINUSMA in #Mali at a t…1 week ago21 January 2023

Acha Leke@achalekeGreat week at #davos .. connecting with friends, clients and friends of Africa .. we hosted our McKinsey Africa bre… twitter.com/i/web/status/1…1 week ago20 January 2023

Louise Mushikiwabo@LMushikiwaboRT @rbarwanda: IMF Executive Board has approved a $319 million arrangement for Rwanda under the newly established Resilience and Sustainabi…2 months ago13 December 2022

Acha Leke@achalekeRT @oviosu: One of the highlights of last week in Rwanda was having the pleasure to meet President @PaulKagame who graciously hosted @achal…2 months ago08 December 2022

Acha Leke@achaleke#GreenAfrica: If Namibia, Morocco, and Egypt dedicate less than 1% of land to renewables, they could generate expor… twitter.com/i/web/status/1…7 months ago22 June 2022

#Kadaga@RebeccaKadagaRT @JuliusBintu: Happy birthday Rt. Hon. @RebeccaKadagaUG.🎉🎂🎊 May this special day mark your entry into a new dimension of breakthroughs.…8 months ago24 May 2022

#Kadaga@RebeccaKadagaRT @JuliusBintu: #Uganda: Absence of the speaker and the deputy speaker of parliament Rt. Hon. @RebeccaKadagaUG advocated for creation of…10 months ago16 March 2022