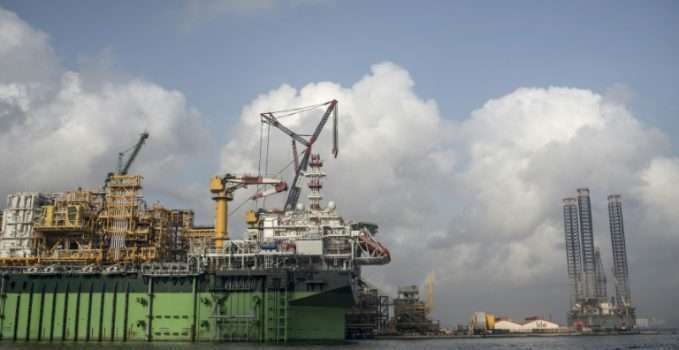 Posted On March 4, 2018 By In COUNTRIES, Nigeria, Photo gallery, SLIDER-, VIDEO&PHOTO With 312 Views

Nigeria looks to local skills to develop oil and gas 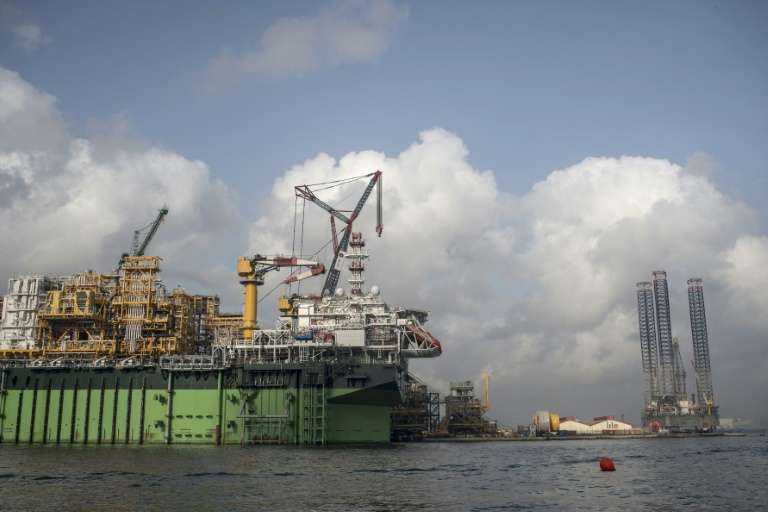 The Egina FPSO (Floating Production Storage and Offloading) unit is currently berthed in Lagos harbour, but will soon be moved offshore to produce up to 200 000 barrels of oil per day. 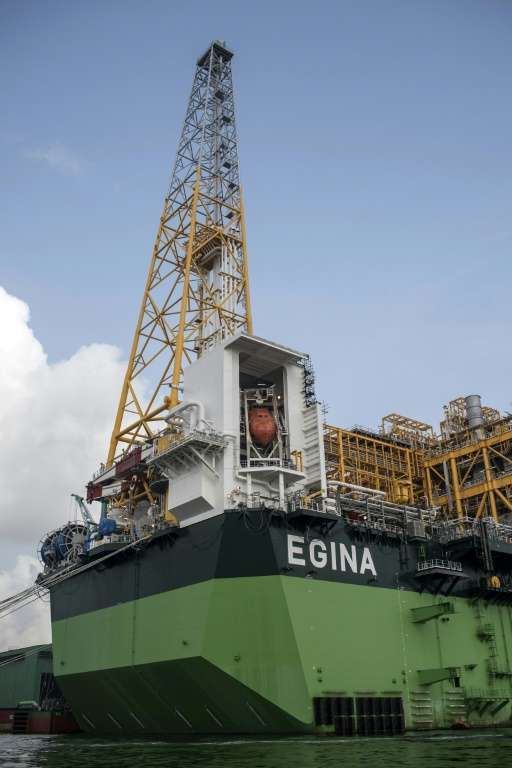 Fishing boats look like specks alongside Egina, which has been moored for the last month in Lagos. Even the container ships that normally dominate the port look like small boats.
The floating production storage and offloading facility (FPSO), developed by the French group Total, looks a lot like a giant Lego set.
Everything about it is huge: its weight (220,000 tonnes), length (330 metres/1,083 feet) and width (60 metres). At 33 metres, it’s as high as a 10-storey building.
The vessel is in its final stage of construction and will soon produce some 200,000 barrels of oil a day or about 10 percent of national production.
In the next few months, Egina will head to the Niger Delta and link up to 44 subsea wells some 1,600 metres under the Gulf of Guinea.
Up to 2.3 million barrels of crude can be stored in its hull, before being taken abroad to be refined.
The cost of the project is up to $16 billion (12.8 billion euros) but according to the head of Total in Nigeria, Nicolas Terraz, the investment is justified.
“Nigeria is a very important country for Total. We’ve been here for the last 60 years,” he told AFP, looking up at the huge ship.
“It’s the biggest FPSO ever constructed by the group.”
– ‘Local content’ –
The construction of Egina in Africa for Africa may be a first but it’s not been welcomed by everyone in Nigeria’s commercial capital.
Local residents say it’s disturbed their sleep while the Egina’s sheer size has made it difficult for the yachts of amateur sailors to catch the wind in their sails.
It’s not just Egina’s size and cost that are unique: it’s the first major project to have been undertaken since a 2010 Nigerian law that made “local content” compulsory.
More than half of those involved in its construction were Nigerian and more than 75 percent of the work was done in Port Harcourt or Lagos.
The remainder was done at the Samsung shipyard in South Korea.
“We would have never thought that these things could be done locally,” said Dolapo Oni, an oil analyst with Ecobank. “It was a big gamble for Total.”
“Local companies have no access to local banks or even international funding.
“But Egina shows that there is still foreign confidence at a time when Shell or Exxon don’t invest anymore in Nigeria.”
Nigeria has suffered years of mismanagement of its resources.
In January, parliament voted for a bill to reform the oil sector and make it more transparent, nearly two decades after it was first proposed.
The bill still needs the approval of President Muhammadu Buhari to become law.
Buhari, who also doubles up as oil minister, has vowed to overhaul the sector as part of his drive to clean up politics and claw back billions of dollars in looted public money.
– Vast inequality –
In Lagos, the fishermen who pass by the Egina every day in their grimy boats can make as little as two dollars a day. It’s a sign of the vast inequality in Lagos.
But private local partners see a chance for change: 3,000 people have already been involved in the Lagos construction phase of Egina.
Ladol, which provides support services to the oil and gas sector and where Egina has been moored, is 100 percent Nigerian.
Its chief executive, Amy Jadesimi, said the vessel’s arrival radically changed the landscape of the industry.
“We now have the biggest crane capacity in the whole of Africa, we have a qualified labour force,” said the 42-year-old former investment banker in London.
“The idea is to host more projects like this one and not only in oil and gas.
“We can fabricate very large silos for agricultural products and now that we can host the largest vessels in the world, they can come and collect the largest amount of domestic products.”
Jadesimi estimated that could generate up to 50,000 jobs.
But the Nigerian government, which gets $1.6 billion a month or 70 percent of its revenue from oil, needs to invest in energy and infrastructure for that to happen.
On the roads leading to the port lorry drivers wait for weeks on end in searing heat just to be able to unload or take delivery of their cargo.