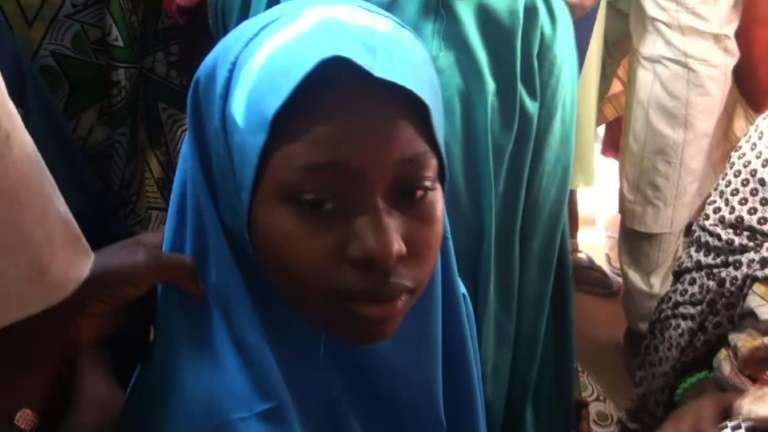 After just four weeks in capitivity, the girls were suddenly brought back to their school in northeast Nigeria on Wednesday morning by their captors

Nigerian President Muhammadu Buhari received the released Dapchi girls on Friday in a meeting clouded by the absence of a Christian student still held by Boko Haram for refusing to convert to Islam.
“We entered into negotiation solely to make sure that no single girl was hurt. This strategy paid off as the girls are being released without any incident,” Buhari said to reporters at the presidential villa in Abuja.
The girls, dressed in brightly coloured hijabs, enthusiastically sang the national anthem before posing for photos with Buhari outside in a garden.
Describing the release of the 107 youngsters — 105 schoolgirls and a younger boy and girl — as a “cheery and hearty” development, Buhari pledged to recover “every abducted citizen in Nigeria.”
“While parents of the Dapchi girls rejoice because of the reunion with their children, I want to appeal to the Chibok community never to lose hope or despair. We are determined as never before to bring back our remaining Chibok daughters,” he said.
The latest mass kidnapping from the town of Dapchi was an embarrassment for Buhari whose government has repeatedly claimed that the Boko Haram Islamist group is close to defeat.
– Dialogue ongoing –
A total of 113 children were seized from the school in Dapchi, in the northeastern state of Yobe, on February 19, all of them schoolgirls except for a girl and boy of primary school age.
On Wednesday morning, 105 of the girls were brought back by the jihadists, who drove freely into the town in a convoy of vehicles waving the black Boko Haram flag and met by cheering residents.
“The insurgents’ only condition was their demands for a cessation of hostilities and a temporary ceasefire to enable them to return the girls (to) the point they picked them (up),” security director Lawal Daura said.
“The remaining six Dapchi girls are yet to be accounted for and dialogue on these students is still on-going,” he said.
Five girls are said to have died in the initial stages of the kidnapping, while one girl — the only Christian — is still being held, with Buhari on Friday promising to free her.
– ‘Praying for her return’ –
Leah Sharibu is still with her captors, apparently because she refused to convert to Islam.
“It is disheartening that one of the girls, Leah Sharibu, remains in captivity,” said Buhari on his official Twitter account.
“We will do everything in our power to bring Leah back safely,” he said.
“There is no news that they have seen my daughter,” Leah’s father Nata Sharibu told AFP over the phone.
“People pray that my daughter will come.”
The Dapchi kidnapping revived painful memories in Nigeria of the April 2014 abduction of over 200 schoolgirls from Chibok, a town also in the northeast, which caused global outrage.
While some of the Chibok girls have been freed in exchange for ransom and the release of top Boko Haram commanders, a total of 112 remain in captivity.
Boko Haram has repeatedly targeted schools giving a so-called Western education in the mainly-Muslim region as part of an insurgency that has killed at least 20,000 people since 2009.
According to the UN children’s agency UNICEF, more than 2,296 teachers have been killed and some 1,400 schools destroyed in the wider northeast.
On Wednesday, the Borno state government announced that all boarding secondary schools outside Maiduguri and the town of Biu would be closed indefinitely with immediate effect.
Boko Haram has increasingly turned to kidnapping for ransom to raise funds for their operations in the Lake Chad region.
While a 2015 offensive launched by Buhari successfully reclaimed swathes of territory back from the jihadists in Nigeria, the group still stages deadly attacks on both military targets and civilians.