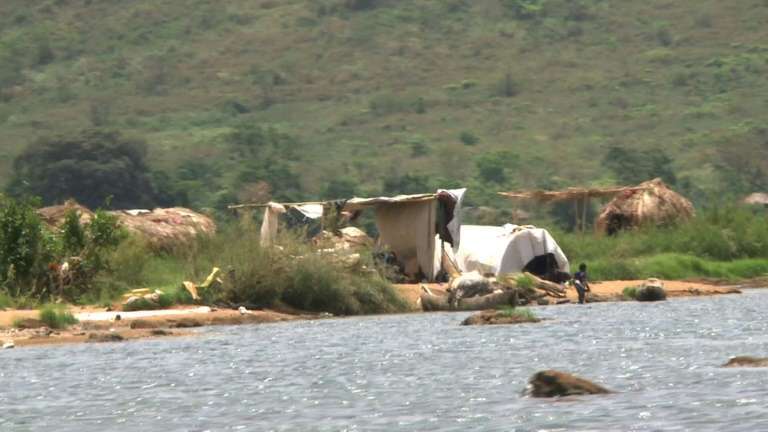 For a few months each year, the Ubangi, a tributary of the mighty River Congo, dries up and a cluster of ephemeral islands emerge from its torrents before the skies darken and seasonal downpours return.
The river, also spelled Oubangui, marks the border between Central African Republic (CAR) and Democratic Republic of Congo (DRC), and most of the islands are barren and deserted.
But a handful host temporary communities, with dozens of makeshift straw huts and tarpaulins stretched out along their sandy banks, as villagers, displaced from their homes in CAR, take refuge on their isolated, transient shores.
Fisherman Matthias Kongba is one of the hundreds to have sought sanctuary.
He comes from the Satema region 300 kilometres (186 miles) upstream but he moved to one of the temporary islands three months ago, tending to his nets and his battered wooden canoe because, he says, “the evil came back”.
The evil he speaks of is a militia called the anti-Balaka, a band of Christian and animist fighters that rose up after mostly Muslim Seleka rebels overthrew the government of President Francois Bozize, a Christian, in 2013.
The Seleka’s short-lived but brutal rule ended in 2014 after intense international pressure and a military intervention led by France, leaving the Muslim population to face bloody reprisals from the anti-Balaka.
Since then CAR has descended into further turmoil and thousands have been killed in inter-communal violence. Amid murder, rape and retaliatory attacks, the conflict has forced a million people to leave their homes, and more than half the population is in dire need of assistance.
“The anti-Balaka were robbing, torturing, committing crimes. We fled to Congo, it’s a disaster,” says Kongba, who left his wife and nine children in the DRC and now represents displaced fishermen on the island.
His family are among the almost 200,000 people from CAR who have registered as refugees in DRC, according to UN refugee agency figures.
Nearly 500 people have settled on the river islet, which faces the village of Bagobolong 2 (80 km east of the capital, Bangui), to escape the anti-Balaka.
“They gradually arrived between December and January. They settled between here and Zawara,” says Francois Kokayeke, village head of Bagobolong 2, noting it is the first time fishermen have lived on the island.
– Scarification –
Along the Ubangi, traders and fishermen are routinely subjected to the racketeering of the anti-Balaka militia, that has posts along the length of its banks.
Many fishermen have stories of friends or family who have been kidnapped or ransomed. Others have been forced to join the militia, through a bloody scarification ritual that they call “vaccination”.
The process involves scarring several parts of the body during a ceremony that can involve whipping and cutting — it’s supposed to make a person invincible to bullets.
“Anti-Balaka catch the fishing boats. They want to ‘vaccinate’ us. If you refuse, they ‘vaccinate’ you by force,” says Kongba, his voice full of anger.
Another fisherman, Aran Bambindo, who is also living on the island after anti-Balaka forces looted and burned the houses of his village, Satema, says family members have been scarred.
“The anti-Balaka take our fish, they whip us and force us to be ‘vaccinated’. It is to force us to fight with them,” Bambindo says.
“Before the ‘vaccination’, they tie you down and give you hemp. This lasts three hours. Some people agree to fight with them and they are ‘vaccinated’ with their children.”
“Others refuse and flee,” he adds.
Bambindo points to his nephew, who does not speak, his eyes staring at the ground.
He has dozens of scars that have cut into the flesh on his arms, chest and back.
– Internally displaced –
As the numbers of displaced on the islands have grown, so too have the problems, including food shortages.
Village chief Kokayeke returns from a fishing trip but his nets are almost empty.
“The fishing is not good because there are too many fishermen now,” explains Kokayeke.
“Some are using the small mesh nets that catch the small fish, so it reduces the reserves even further,” he adds.
The local fishermen association says it has tried to distribute unused nets to new arrivals but that there are too many people.
In the dry season, the Ubangi runs at about five metres, but during the rains its swollen waters can rise up to 12 metres.
Unable to fish, the island inhabitants hang around the tiny entrances to their straw huts, aware that their temporary homes will submerge under the river once the rainy season returns in May.
“It’s (because of) poverty,” says Kongba, in a torn blue T-shirt.
“We can not eat well, we have no drinking water, no care, not enough fishing equipment,” he says, before returning to his fishing net.