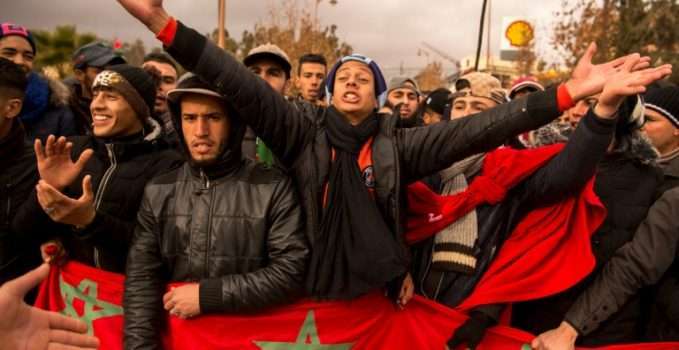 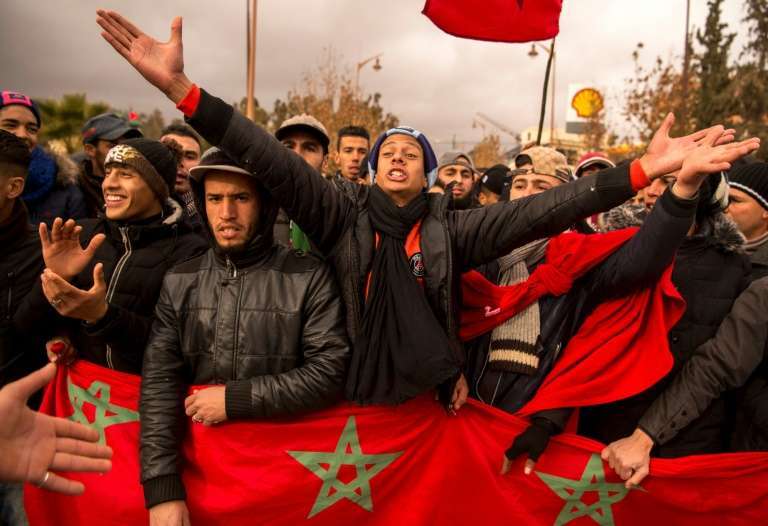 Moroccans shout slogans and wave the national flag during a demonstration in the northeastern city of Jerada on December 27, 2017

Moroccan authorities have arrested two leaders of protests that began last December in the northeastern Moroccan town of Jerada, relatives said on Sunday.
Amine Mkallech and Mustapha Dainane were arrested on Saturday and were still being held on Sunday, they said.
Dainane was arrested following a traffic accident at 1:00 am on Thursday, according to a statement from the general prosecutor’s office in the nearby town of Oujda.
His arrest “has no connection with the events in the city of Jerada”, an impoverished former coal mining town, it said.
Mkallech was also arrested in connection with that traffic accident, a member of the Moroccan Association for Human Rights, Said Zeroual, told AFP.
Dainane gained popularity with spirited speeches during demonstrations in Jerada.
His usually active Facebook page, which displays a photo of Russian revolutionary Vladimir Lenin as its profile image, was no longer available on Sunday morning.
Activists connected to the grassroots Hirak protest movement replaced their Facebook profile pictures with images protesting Dainane’s detention, but they were also no longer available.
The accidental deaths in December of two brothers trapped in a mine shaft in Jerada, followed by two other deaths under similar circumstances, gave rise to peaceful demonstrations demanding “economic alternatives” for the former coal mining town.
Thousands of people have left the city since Jerada’s coal mines, once its economic lifeblood, were shuttered in the late 1990s.
Hundreds of illegal miners risk their lives in closed mine shafts to extract coal, the sale of which is legal thanks to operating permits issued by Moroccan authorities.
An action plan proposed by the government in February, including health care for former miners with lung disease and inspections of closed mines, succeeded in briefly calming social unrest.
But protests and calls for a general strike have continued, over what many believe to be insufficient government action.