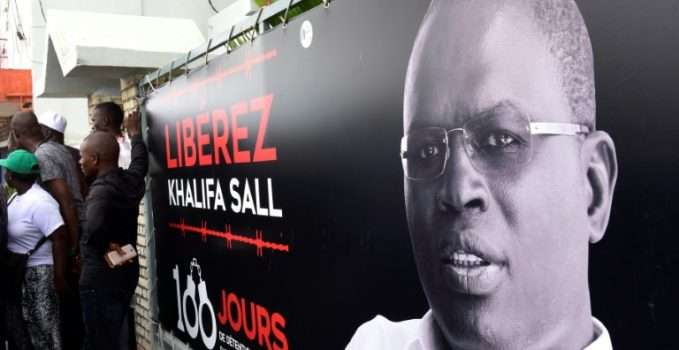 Leading Senegalese politician Khalifa Sall was jailed for five years for fraud on Friday, a sentence that will rule him out of presidential elections due next February.
Sall, 62, who is mayor of Dakar, had denied the charges against him as politically motivated.
He had been accused of fraudulent use of public funds, for which he was also fined five million CFA francs (7,625 euros).
He was found not guilty on charges of criminal conspiracy, money laundering and misappropriating public funds.
Prosecutors had sought a seven-year prison term and a fine worth nearly $10 million (more than eight million euros).
And they said they would appeal the shorter sentence and the smaller fine.
The ruling “doesn’t surprise us,” said one of the lawyers for the state of Senegal, Baboucar Cisse, who insisted that the facts were “true.”
“The state of Senegal will appeal,” he said.
Sall was tried along with his financial director, Mbaye Toure, who was given the same sentences.
“In his capacity as authorising officer, Khalifa Sall has affixed his signature to the back of 110 false invoices” between 2011 and 2015, the judge, Malick Lamotte, said in his ruling.
“We are going to file an appeal, obviously,” one of Sall’s lawyers, Cheikh Khouraissi Ba, told AFP.
The trial had been avidly followed in Senegal since the start of the year, throwing a spotlight on Sall’s high popularity and stirring debate over next year’s elections if he were to be convicted.
Sall represents a growing challenge to incumbent President Macky Sall, who shares the same name but is not a relation.
Supporters of the mayor protested loudly in the packed courtroom when the verdict was announced and police were deployed around the building.
– ‘Kowtow’ –
“Senegalese justice has kowtowed today. President Macky Sall issued an order which Judge Lamotte carried out,” Moussa Taya, one of the mayor’s political advisers, told the press.
“Today, Khalifa is in prison, but in the hearts of all Senegalese,” said Makhtar Diaw, a deputy mayor in a district of Dakar.
A dissident member of the Socialist Party, Khalifa Sall began his political activism at the age of 11.
He later held various ministerial portfolios under then Socialist president Abdou Diouf before being elected mayor of the capital in 2009.
Sall and Tour appeared in the dock with six other municipal employees who faced the same charges. Of these, four were given jail terms ranging from six months to five years and two were discharged.
The specific charge of misappropriating public funds centred on 1.83 billion CFA francs ($2.85 million, 2.7 million euros) of city money which allegedly was misused between 2011 and 2015.
The court heard allegations of a system of fake receipts for rice and millet, the money from which Sall was accused of using for “political purposes”.
Sall said the money was not diverted for personal or political use but instead used for discretionary spending on sensitive issues such as security.
“Should I be robbed of my right to be a candidate because Macky Sall doesn’t want Khalifa Ababacar Sall to become his opponent in 2019?” the mayor asked combatively on the trial’s last day.