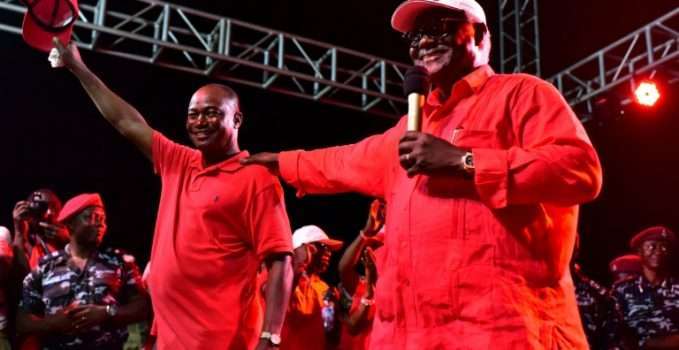 Voters in the West African state of Sierra Leone were called out to vote on Saturday in the final round of a presidential campaign marked by verbal sparring, sporadic violence and a last-minute legal battle.
A wafer-thin margin separated the two frontrunners after the first round on March 7, adding to tensions in a country where political loyalties are often divided along ethnic lines and traumatic memories of civil war run deep.
Opposition challenger Julius Maada Bio of the Sierra Leone People’s Party (SLPP) had a narrow edge over Samura Kamara of the ruling All Peoples’ Congress (APC), in a ballot with a turnout of more than 80 percent.
“The race is too close to call,” Edmond Abu, director of the Native Consortium and Research Center, told AFP on Friday.
The key to victory lies with whoever wins Kono, a diamond-rich district in the east of the country, Abu said.
The runoff should have taken place on Tuesday but was delayed so the High Court could hear a complaint by the APC that some ballots had been tampered with.
The court lifted an injunction on Monday, but the National Electoral Commission said it needed four extra days for preparation because of lost time.
Bio, 53, is bidding to end a decade in power by the APC.
He is a blunt-talking retired brigadier who took part in a 1992 coup and briefly led a junta in 1996 that helped pave the way for democratic elections.
In 2012, he lost the election to the APC’s Ernest Bai Koroma, who is stepping down after a decade in power.
– Tension –
Bio’s platform is focused on education and criticism of the government’s closeness to China, while Kamara is presenting himself as a continuity candidate who will develop Koroma’s programmes on health care and road construction.
But the campaign has been characterised by ugly verbal exchanges and occasional violence.
Bio has accused the APC of using police intimidation against his party and the electoral commission, and of sponsoring the court case to cling to power.
Police have reported a string of attacks on candidates and supporters on both sides since the first round, which saw Bio lead the field by a mere 15,000 votes.
Kamara has said he is “satisfied” with the court decision, and repeated calls for the vote to go ahead peacefully.
“The safety and security of Sierra Leone is in our hands. We should not allow an election to undermine our integrity,” he said.
The APC broadly relies on the Temne and Limba people in its northern strongholds, while the SLPP is more popular in the south with the Mende ethnic group.
Sierra Leone, rich in minerals, was a British colony from 1787 until 1961. Three decades later, it plunged into a civil war that lasted 11 years and claimed 120,000 lives.
Koroma’s decade-long tenure was marked by the 2014-16 Ebola crisis, which killed almost 4,000 people, and a mudslide that struck the capital Freetown in 2017, killing hundreds.
A total of 3.1 million people are entitled to cast their ballots. Voting runs from 0700 GMT to 1700 GMT, but the first results are expected to come in at the start of next week.