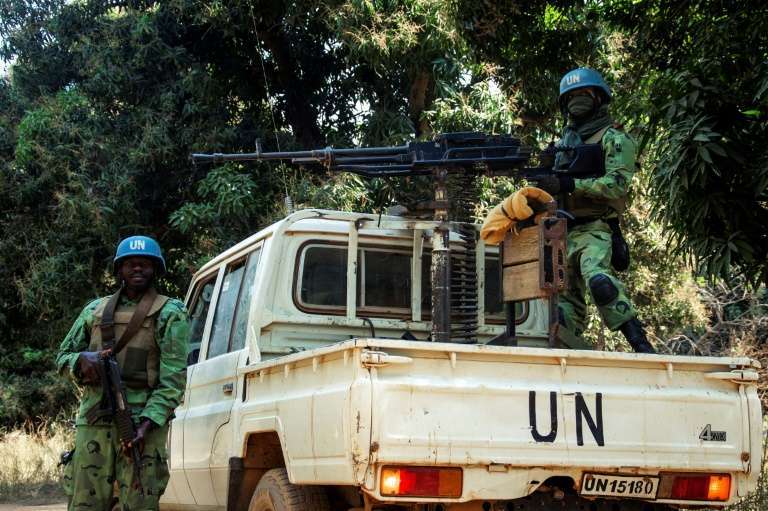 Soldiers with the UN mission in the Central African Republic stand guard during a UN inspection in the northwesten village of Bedaya on January 12, 2018

Unknown attackers have killed six humanitarian workers including one from the United Nations children’s fund UNICEF in the northwest of the Central African Republic, the UN said Wednesday.
The world body’s Minusca mission “condemned the attack which led to the death of the six humanitarian workers including one from UNICEF,” on Sunday at Markounda.
Markounda has been plagued with violence since the end of last year as the National Movement for the Liberation of Central Africa and the Revolution and Justice party battle for domination.
“We are deeply saddened and shocked by the death of our colleague as well as the five other education workers on February 25,” said UNICEF regional director for west and central Africa Marie-Pierre Poirier.
“The car carrying the UNICEF humanitarian worker and the five other people, including two women, was attacked by men from the (Muslim) ex-Seleka (rebels) operating in the region,” Markunda resident Cyrille Mbagaye told AFP by telephone.
“We firmly condemn this senseless act against humanitarian workers who were there to improve the lives of the vulnerable people,” a UNICEF statement said.
At least 13 aid workers died in CAR last year in similar attacks blamed on various armed groups fighting in the provinces.
One of the world’s poorest nations, CAR has been struggling to recover from a 2013 civil war that started when President Francois Bozize was overthrown by the Seleka rebel alliances.
The government today controls only a small area of the country while armed groups fight to control diamond and gold resources as well as cattle.