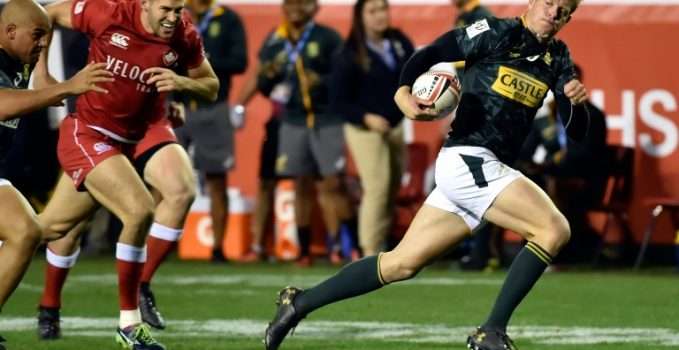 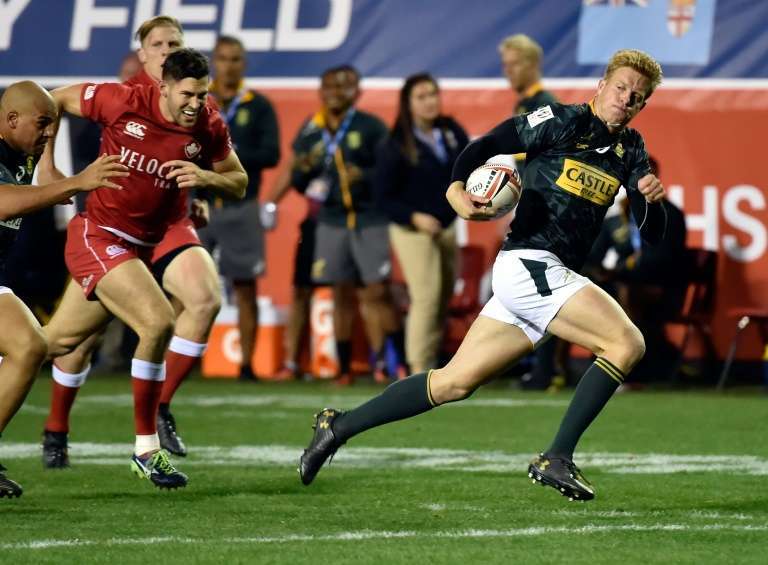 South Africa and Australia were level at halftime, but the Blitzboks dominated after the break with tries from Cecil Afrika, Ruhan Nel (picture) and Selvyn Davids to book a semi-final spot at the Las Vegas Sevens 29-17

South Africa, the defending champions and current World Rugby Sevens Series leaders, won twice Friday on the opening day of the Las Vegas Sevens.
South Africa erased a 14-0 deficit to defeat Wales 26-21 then closed the night with a 19-12 victory over Canada to become one of five teams to win both of their matches on the opening day of the fifth leg of the series.
South Africa’s Pool B rivals England were also unbeaten on Friday, running in six tries in a 40-12 rout of Canada before a 33-12 win over Wales in which Tom Bowen ran in a hat-trick.
South Africa and England will face off to decide the pool on Saturday, and the Blitzboks will be hoping that Kyle Brown, who limped off early in the second half against Canada will be fit.
South Africa had suffered an earlier injury setback when Werner Kok took a blow to the jaw against Wales and was ruled out for the remainder of the weekend, to be replaced by Ruhan Nel.
Fiji, coming off a victory in the fourth leg of the series in Hamilton, New Zealand, lit up the scoreboard with a 38-0 victory over Russia and a 33-5 triumph over France to top pool A.
The United States produced two impressive wins in Pool C, topping Samoa 26-12 before beating Australia 28-7 in a match the Americans led 21-0 at halftime.
In Pool D, Argentina surprised New Zealand 26-19 and edged Scotland 21-19.
New Zealand, currently second in the series standings, had beaten Uruguay 28-7 before falling to Argentina, who beat the Kiwis for just the 10th time in 82 meetings.
“The last time we were very close and we talked about how we could do it,” Argentina coach Santiago Gomez Cora said. “It’s just about not making any mistakes and playing very hard.”
New Zealand will play Scotland for a quarter-final berth when pool play continues at Sam Boyd Stadium on Saturday.
South Africa, whose run to the series title last season included a triumph in Las Vegas, lead the current standings on 77 points with New Zealand second on 69 and Fiji third on 62.