Posted On March 2, 2018 By In COUNTRIES, Nigeria, Photo gallery, SLIDER-, VIDEO&PHOTO With 195 Views 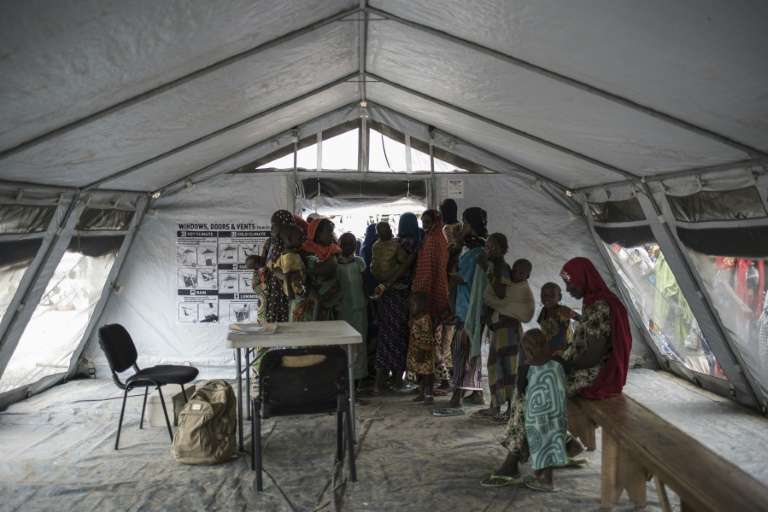 Boko Haram fighters killed three aid workers in a remote corner of northeast Nigeria, the UN said on Friday, forcing at least one charity to suspend vital medical support to thousands badly hit by the Islamist insurgency.
The attack took place on Thursday evening in Rann, some 175 kilometres (110 miles) east of the Borno state capital, Maiduguri, near the border with Cameroon.
It came nearly two weeks after Boko Haram fighters abducted 110 schoolgirls from the town of Dapchi, in neighbouring Yobe state.
Both incidents underlined the persistent threat to civilians from the jihadist group, which the military and government has repeatedly claimed is on the verge of defeat.
But there will also be fears about a resurgence in the ability of the group to hit “hard” targets as Thursday’s attack was against soldiers.
Mohammed Abdiker, director of operations and emergencies at the International Organization for Migration (IOM), said the militants had “superior firepower”.
They were “armed with automatic weapons, rocket propelled grenades and gun trucks”, he added.
Rann has been hit before in the conflict: in January 2017, a botched Nigerian air strike intended to hit jihadists killed at least 112 people as aid workers distributed food.
Commanders at the time called the bombing a mistake and blamed “the fog of war”.
– ‘Cowardly attacks’ –
President Muhammadu Buhari, who was elected in 2015 on a pledge to defeat the Islamic State group affiliate, condemned Friday’s attack in Rann and others as “cowardly”.
They had “only renewed the determination of our government to bring the insurgency to a decisive end, in the shortest possible time”, he wrote on Twitter.
“I sympathise with the United Nations and other humanitarian agencies working in Rann,” he added.
A UN spokeswoman in Abuja, Samantha Newport, said the attack happened outside a camp housing some 55,000 people displaced by the conflict.
“Of the aid workers that were killed, two worked for the IOM in camp management; and one was a medical doctor working as a third party consultant for UNICEF,” she added.
Three aid workers were injured and a female nurse was missing, feared abducted. All those killed, injured or missing were Nigerian.
There was no immediate confirmation of deaths or injuries among internally displaced people (IDP), but a civilian militia source in Rann and a senior military figure in Maiduguri said eight soldiers were killed.
– Charity withdraws –
The French medical charity Doctors Without Borders (MSF) announced late Friday it had “suspended its medical activities in the town and evacuated 22 national and international staff”.
MSF teams have provided medical care in Rann since January last year for conditions including malaria and malnutrition.
“Leaving our patients, which include 60 children currently enrolled in our nutrition programme, without medical assistance, is an extremely painful decision,” said MSF emergency coordinator in Nigeria, Kerri Ann Kelly.
“We will continue to evaluate how the situation evolves and we will return as soon as the conditions allow. This latest attack is a stark reminder that it is the people in Borno who are paying the price of this ruthless conflict.
“They are trapped in a deadly cycle of violence and are heavily reliant on external assistance to survive. In Rann, this is now considerably reduced.”
Rann was cut off during the last rainy season, making it impossible to bring in food or aid supplies, worsening levels of chronic malnutrition.
– Suicide attack –
In another example of the threat to civilians, a female suicide bomber blew herself up near a mosque in Buni Yadi, Yobe state, early on Friday.
“From all indications it was a premature explosion… She died and she injured two worshippers who were heading to the mosque,” said civilian vigilante leader Ibrahim Liman.
Buni Yadi is 45 kilometres south of the Yobe state capital Damaturu. It was the scene of another Boko Haram school attack in February 2014, when at least 40 boys were killed.
The town was cleared of Boko Haram in March 2016.
Meanwhile the government in Abuja said the hunt for the missing Dapchi students had been “extended to neighbouring countries”, after reports some may have been taken into Niger.
Boko Haram’s quest to establish a hardline Islamic state in northeast Nigeria has left at least 20,000 dead and made more than 2.6 million others homeless since 2009.