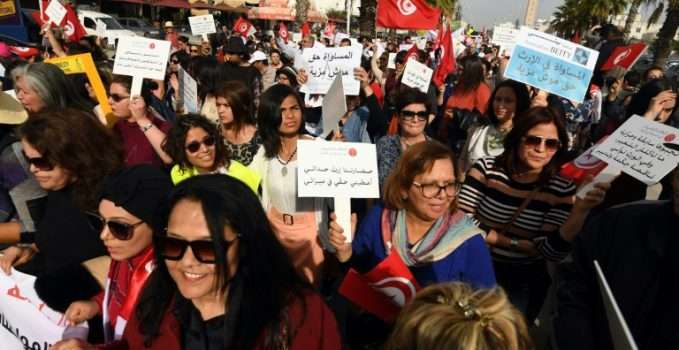 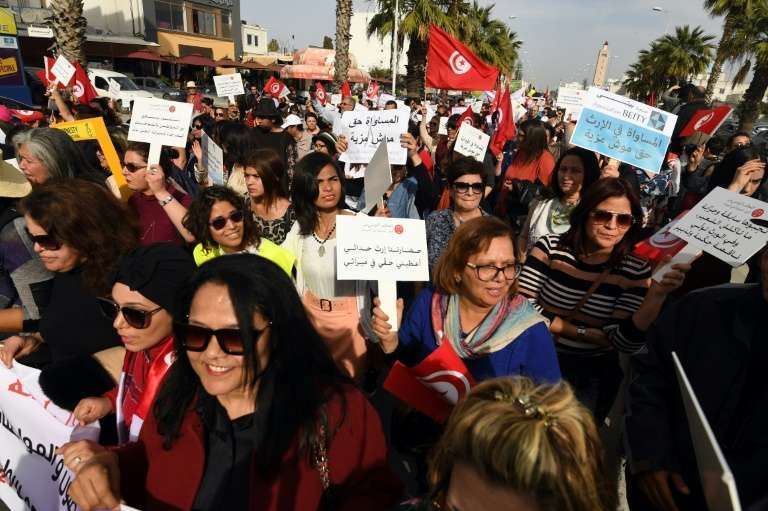 Tunisian women led a march by more than 1,000 demonstrators Saturday, including men, to demand equal inheritance rights for both sexes in the North African country.
Tunisia’s inheritance law is based on Islamic jurisprudence stipulating that men inherit double the amount received by women.
The demonstrators marched to the seat of parliament in the Tunisian capital chanting equal inheritance rights “are a right, not a favour”.
Last year, President Beji Caid Essebsi announced plans to set up a commission to examine “individual liberties” and “equality in all domains”, including inheritance.
His announcement sparked opposition from Muslim clerics who issued a statement saying the proposals amounted to “a flagrant violation” of Islamic precepts.
Tunisia, which adopted a 1956 Personal Status Code extending several rights to women and abolishing polygamy, is seen as a pioneer on women’s emancipation in the Arab world, although tensions often surface between conservatives and reformists.
The 2011 revolution in Tunisia toppled the regime of autocratic president Zine el Abidine Ben Ali and sparked uprisings across the Arab world, where changes to inheritance rights are considered a taboo.
But activists on Saturday stressed the demand for equality among the sexes in Tunisia.
“There must be equality, it is in the constitution,” adopted after the 2011 uprising, said Sana Ben Achour, president of the Beity association which supports women.
A constitution adopted in 2014 guarantees equality between men and women.
Article 21 of the constitution states: “All citizens, male and female, have equal rights and duties, and are equal before the law without any discrimination.”
Monia Ben Jemia, who heads the Tunisian Association of Democratic Women, said she hoped the law will change by next year.
“The fact that we are talking about it now means that we have already won the battle,” she said.
Rahma Jawadi, who heads a rural women’s organisation in northwestern Tunisia, said any change in the law on inheritance would help empower women in her region.
“They could farm the land and have a revenue,” she said.
The commission examining individual liberties is expected to release its first report in June and would recommand a policy of step by step changes, one of its members said.
It could suggest families take it upon themselves to equally distribute the inheritance between sons and daughters, thus bypassing Islamic precepts.