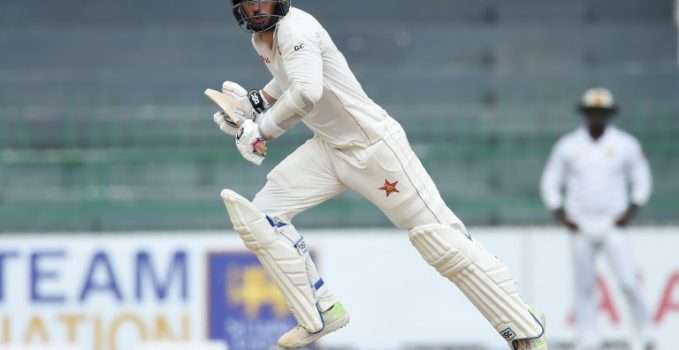 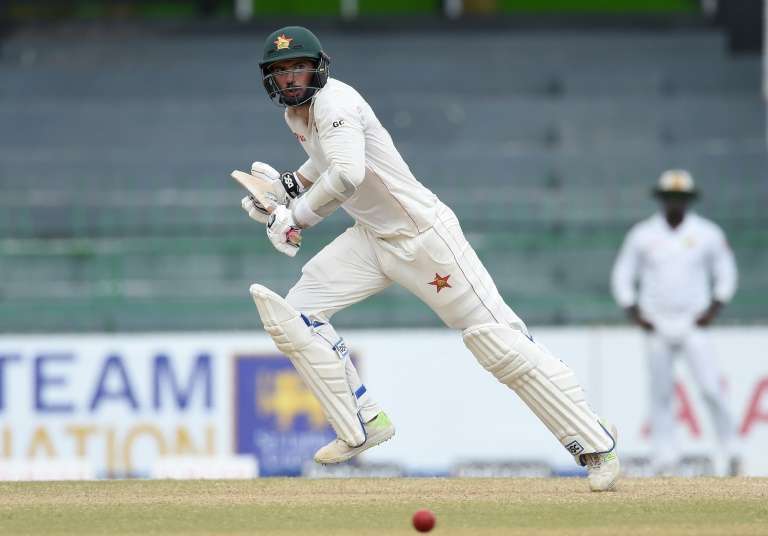 Zimbabwe cricket captain Graeme Cremer runs between the wickets during the fourth day of the only one-off Test match between Sri Lanka and Zimbabwe at the R Premadasa Cricket Stadium in Colombo on July 17, 2017

Zimbabwe captain Graeme Cremer rued his team’s missed opportunities for World Cup qualification after their three-run defeat to United Arab Emirates saw them all but drop out of the running for next year’s event.
“It’s very painful,” Cremer said of Zimbabwe’s defeat. “We had two bites at getting to the final, and we’ve stumbled at the last hurdle.”
With five points, Zimbabwe needed a victory over either West Indies or UAE to reach the World Cup in England and Wales next year.
But they lost both games, and now only a miraculous low-scoring tie between Ireland and Afghanistan on Friday will see them through.
Their World Cup dreams are effectively over.
“We were so hungry (to win),” said Cremer. “The ball was in our court, we just needed to turn up today and play some of our best cricket, then it might have been a different story. The guys are shattered in the change room. I’m sure most Zimbabweans are.”
Lunchtime rain interrupted the end of UAE’s innings at 235-7, and meant that Zimbabwe faced a revised target of 230 in 40 overs on the DLS method.
They lost early wickets but were restored by counter-attacking innings from Sean Williams and Sikandar Raza. Williams scored 80 in quick time, while Raza cracked 34 from 26 deliveries, but both fell with victory almost in sight, allowing UAE to surge to victory.
“We gave them a few too many, and then to only have 40 overs with the bat, that cost us a bit,” said Cremer.
“We’d still back ourselves to chase 230 in 40 overs, but a poor start again. We keep losing wickets in that first power play, which has probably cost us.”
“When Raza got out, that was crucial for us. Because he could have won that game with a couple of overs to spare, the way he was batting. When Sean got out, that was another big moment in the game.”
The match was watched by around 10,000 spectators, with Harare Sports Club filled to capacity. They cheered Zimbabwe to the last, but were ultimately left disappointed.
“The fans have been excellent, from Bulawayo to here, and another great turnout today,” said Cremer.
“They’ll probably be more disappointed than anyone, because they’ve turned out and at least expected us to win one of these two games to qualify. So there was big expectation on us. We’re really sad that we couldn’t give them what they wanted.”
While the Zimbabweans were heartbroken, UAE captain Rohan Mustafa revelled in his side’s first major victory over a Full Member team.
“A great achievement for the UAE team, because we have never won against a Test nation team,” said Mustafa. “So it’s a great achievement, and it shows the world that UAE, and the other Associate countries, are getting better.
The West Indies, who edged Scotland by five runs in another rain-hit match on Wednesday, had already secured the first qualifying spot from the tournament.
On Friday, Afghanistan and Ireland will meet at the same Harare Sports Club venue with the winner guaranteed a place in the 2019 finals.
The match will be Niall O’Brien’s 100th ODI for Ireland while Rashid Khan will be looking to claim four wickets to become the quickest bowler to 100 wickets in the 50-over format.