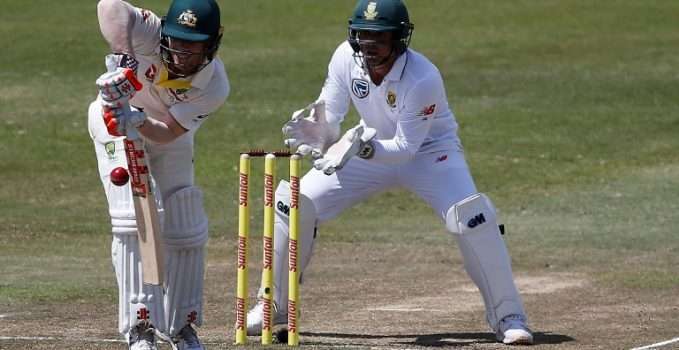 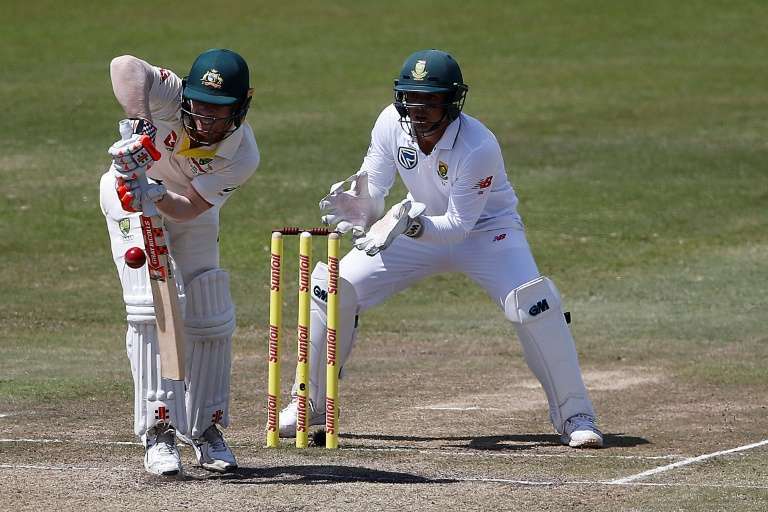 Australia vice-captain David Warner says he will always stick up for his family after claiming a “vile and disgusting” remark about his wife by South Africa’s Quinton de Kock led to their ugly altercation.
Both players were punished Wednesday for the bust-up during the opening Test in Durban, with Warner fined 75 percent of his match fee and De Kock 25 percent.
They are free to play the second Test starting Friday in Port Elizabeth, although Warner was also given three demerit points, meaning he will be banned if he gets one more within the next year.
Warner admitted he let his emotions take over after confronting the Proteas wicketkeeper/batsman as the players walked up a narrow staircase to the dressing rooms during the tea interval on Sunday.
Footage was captured on CCTV and leaked, showing the Australian being restrained by his team-mates.
Warner said he was used to taking flak from fans and opposition players, but claimed De Kock’s remark crossed a line.
“The other day I was probably out of line. I’ve seen the footage and I regret the way it played out but for me — it is how I am and I responded emotionally and regretted the way I played out,” he told Australian media in South Africa.
“But I’ll always stick up for my family.
“I cop it left, right and centre, especially off the field from spectators. I am used to that and it doesn’t bother me.
“But in the proximity of my personal space and behind me, a comment that was vile and disgusting and about my wife and just in general about a lady was quite poor, I felt.”
He added: “When it comes to family or racism comments or anything like that, that’s just a no-go zone.”
New footage shows the pair walking from the ground together and Warner is heard to call De Kock a “fucking sook”, according to The Australian newspaper, referring to someone who is soft or easily upset.
He apparently responded by making disparaging remarks about Warner’s wife Candice, a model, which escalated the row as they made their way to the dressing rooms.
South African coach Ottis Gibson has defended De Kock against allegations he provoked the heated altercation.
“I think everybody just needs to focus on cricket. Calm down and get back to cricket,” he said.
Warner and De Kock are yet to speak since the incident but the Australian opener said he hoped to break the ice at some point in the near future.
“Hopefully I can speak to him in the next couple of days, or after the game, or after the series,” he said.
Match referee Jeff Crowe is expected to meet with skippers Steve Smith and Faf du Plessis on Thursday, spelling out how he wants players to behave when the series continues.