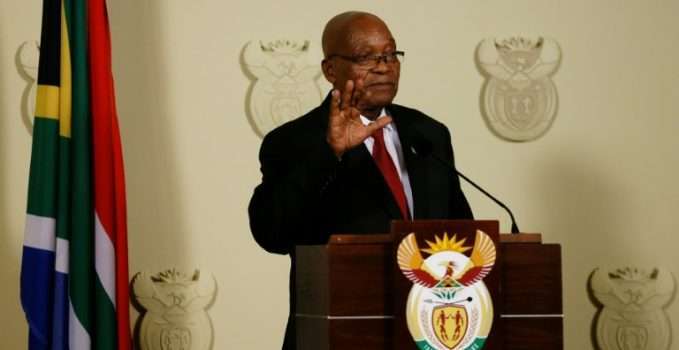 Disgraced former South African president Jacob Zuma could appear in court within weeks on charges of corruption, fraud and money laundering in connection with a decades-old $5 billion arms deal, reports said Sunday.
Quoting sources close to the case, news websites News24 and TimeLive said the first hearing could take place in Durban on April 6.
Prosecutors in the case allege that Zuma took kickbacks from the purchase of fighter jets, patrol boats and other arms manufactured by five European firms including British military equipment maker BAE Systems and French company Thales.
It was announced last week that Zuma, who resigned as president last month, would face prosecution over the deal signed in the 1990s.
However, a spokesperson for the elite Hawks police investigative unit told the eNCA news channel the date for the hearing had not yet been confirmed.
Hangwani Mulaudzi said it was hoped that it would be finalised within the next week.
Zuma stepped down under pressure from his ruling African National Congress party in the wake of a slew of corruption scandals.
Zuma’s criminal charges relate to the arms procurement deals struck by the government in the late 1990s and from which he is accused of profiting corruptly to the tune of four million rand ($345,000, 280,000 euros).
Prosecutors in 2009 decided to drop the corruption charges against Zuma just months before he became president. Last year a court ruled against that decision, leading to the path to last month’s decision to prosecute.
State prosecutors previously justified dropping the case by saying that tapped phone calls between officials in then-president Thabo Mbeki’s administration showed undue interference.
However, National Director of Public Prosecutions Shaun Abrahams, told a media briefing in Pretoria on March 16 he believed there were “reasonable prospects of a successful prosecution of Mr Zuma on the charges listed in the indictment”.
Zuma would face one count of racketeering, two counts of corruption, one of money laundering and 12 counts of fraud.
“I am of the view that a trial court would be the most appropriate forum for these issues to be ventilated and to be decided upon,” said Abrahams.
The National Prosecuting Authority (NPA) spokesman Luvuyo Mfaku confirmed to AFP earlier that Thales would also face prosecution, alongside Zuma.
If found guilty, Zuma could face a lengthy prison sentence.